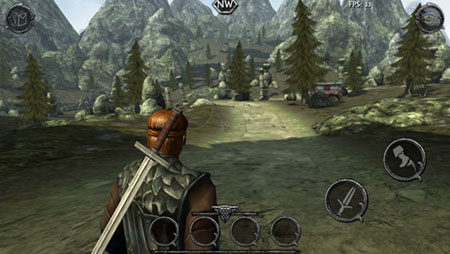 The epic role playing game Ravensword: Shadowlands is going to receive a new update in the near future, introducing a new area and new features.

The new update will be called Realm Of The Ancients and it will introduce a brand new area called the kingdom of Tyreas. This new zone will be a challenging area featuring all new enemies to fight and a new boss to defeat. This new boss will definitely be a terrible foe: werewolves don’t pull any punches in battle after all.

The new additions don’t end here. Players will be able to obtain a new magic rune that will allow them to scare their enemies. Bosses will probably not be affected by this but it’ll be good enough to avoid unwanted regular encounters during your travels.

The update will also introduce the API for iOS 7 controllers so that the game can be played with the new controllers that will be released soon.

Ravensword: Shadowlands is now available for purchase on the App Store. The game can be played on both iPhone and iPad.

The Ravensword: Shadowlands Realm Of The Ancients update will be released on October 31st. You can check out a video detailing some of the features of the original game right below.