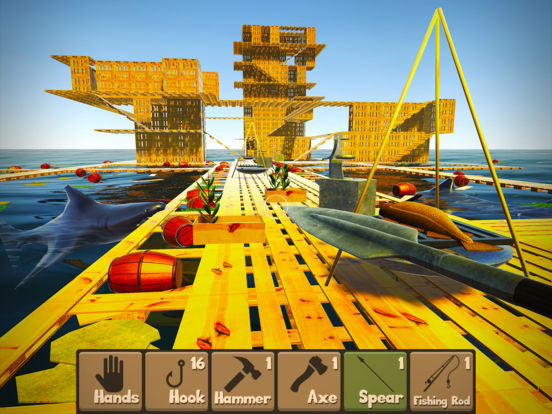 Look alive! You’re stranded in the middle of the ocean with nothing but a hook and your wits to keep your alive! Raft Survival Simulator is exactly what it sounds like. With hungry sharks circling around your dinky raft, you’ll need to use your hook to collect drifting debris and make whatever you can to survive. We’ll help you survive the ocean life with our Raft Survival Simulator cheats, tips and tricks strategy guide!

1. Watch for barrels and crates!

In addition to the random materials you’ll find drifting by, sometimes you’ll see a barrel or a crate. Be sure to grab these as soon as you can!

Once you reel them in you’ll receive multiple random materials to help you build more stuff. Try to keep your head on a swivel to make sure that you don’t miss anything.

Be on the lookout for:

Remember: the longer you charge your hook, the farther it’ll go.

You’ll need scrap, so keep a look out for floating white pieces of debris – that’s scrap. After that, make a Water Purifier. You’ll need rope, planks, and scrap for it. Rope can be crafted out of two leaves.

Equip the mug and use it by water to collect seawater, then use while standing in front of the water purifier. After it’s done boiling, your water will be safe to drink!

Now, for food. We’ve found that the best way to keep yourself full is fish. To craft a Fishing Rod you’ll need the same things you did for the Water Purifier. To fish, equip the fishing rod and use it near water.

Wait for the bobble to go under water, then use it again to reel the fish in. You don’t have to wait very long for a fish to bite which makes this the premiere way of getting food.

Next you’ll need to build a Cooker, which also uses rope, planks and scrap. Use the raw fish in front of the Cooker to cook, and voila!

By now you’re probably running out of space on your raft. It’s time to expand! You’ll need a Hammer before you can start. When it’s equipped, looking at an empty part of your raft will show a green silhouette if you can build there.

A single tile costs 5 planks. It’s up to you if you want to build the advanced stuff like walls and doors, but they’re not really necessary.

Sometimes you’ll get Palm Seeds from the barrels and crates. If you craft a Palmbox, you can grow the seeds. Eventually they’ll grow into a full-fledged palm tree which you can cut down using an Axe. This is an easy way to get more planks and leaves!

You can create hand torches so you have an easier way of seeing during the night, but you can also make the more expensive Standing Torch. These can be placed down to give off a lot of light.

These also have the added benefit of scaring off the shark passively. If you put a couple of standing torches around the perimeter of your raft, you should have no shark problems anymore.

At this point in the game you’re pretty much setup for easy survival. With the shark at bay and plenty of water and food to go around, you can start crafting whatever you like. To make things easier, we recommend building a couple of Item Nets.

You can build these using the hammer. Item nets look identical to plain old wooden tiles, but they have a net opening in the center. If a floating item drifts into it, it’ll get stuck there waiting for you to collect it.

You’ve probably noticed this by now but the items always spawn on one side of the world and drift in the same direction.

Find out which direction they come from then place down a bunch of item nets in a straight line, covering as much distance as you can. You’ll have no problems with materials after you get a couple of these down.

That’s all for Raft Survival Simulator. If you have any other tips or tricks to share, leave us a comment below!