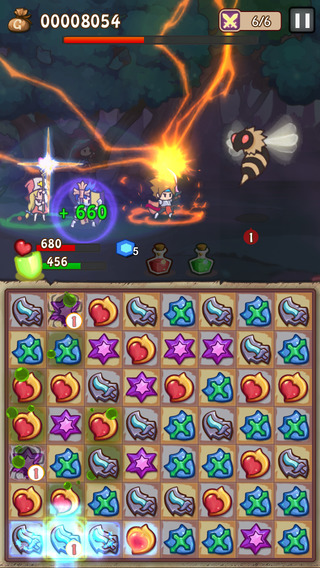 Hero Emblems, developed by HeatPot Games, starts four characters making up the Princess’ guard who will end up traveling all over the game’s world to rescue the Princess who has been kidnapped. The game’s story is pretty standard fantasy RPG fare but the character interaction is really excellent.

The game’s battle system is just as nice as the character interaction. Hero Emblems employs a turn based battle system played with puzzle game mechanics, as players will have to match three or more symbols on a board to perform an action. The four playable characters come with different abilities so it’s really important to pay attention constantly and match the right symbols for the right actions. Different tiles combinations will also allow players to unleash more powerful attacks and spells as well as unlocking more powerful actions.

Hero Emblems is now available for purchase on the App Store. The game is currently available for only $2.99 but the price will soon go up to $3.99 so make sure to purchase it as soon as possible if you’re interested in this nice role playing game.