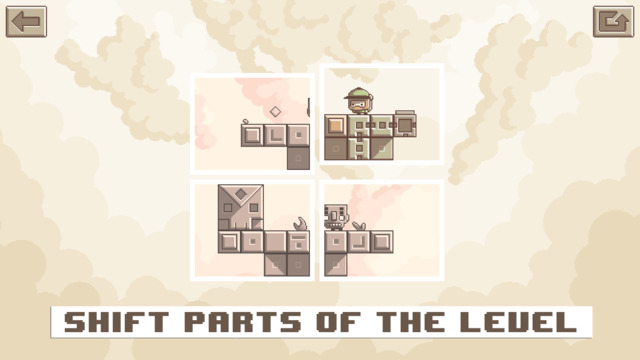 A new puzzle game has been released on the App Stor a few hours ago, a new game sporting a really cute graphical style and interesting gameplay experience that all fans of the puzzle games genre will surely enjoy.

The new puzzle game is called Shifter! and it’s been developed by Bomb-o-craker. In the game, players will have to take control of the explorer and reach the end of each stage by activating a variety of special mechanisms. Sometimes players will also have to shift parts of the level around by moving them on a grid, a feature that adds quite a bit of complexity to the game. Don’t be fooled by the game’s cute graphical style: Shifter! is a really though puzzle game that will require mastery of its mechanics to be completed.

Shifter! is now available for purchase on the App Store for the price of $0.99. The game seems to be one of the more interesting puzzle games released this year so make sure to take a look at it if you’re a fan of the genre and want to put your puzzle games skills to the test.