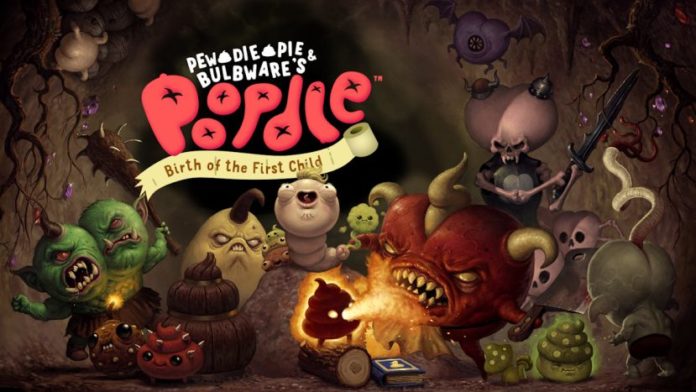 Poopdie is a mobile game created Polish developer Bulbware in collaboration with YouTube superstar PewDiePie… and the game itself had a bit of controversy when Apple initially rejected the game from appearing on the App Store.

I can understand why – the game itself is a puerile one with lots of poop and fart jokes (and characters) – but even so, it has its own charm and it did keep me busy for hours playing it. And it eventually got approved by Apple, so I guess everybody’s happy.

And today I am here to make you happy as well with a complete guide for Poopdie – tips and tricks that will help you unlock more characters, destroy all enemies and, well, go through the story like diarrhea through your colon. Fast.

Hoard up on coins

Coins are insanely important in Poopdie and very difficult to get. Especially early on, when you will need them to power-up your main character and followers, you will need every coin that you can save.

This means that you should never waste coins and instead do your best to hoard up on them as much as possible!

In other words, don’t waste them on things that you can get for free, even though some of them are time consuming. This means that you shouldn’t use the teleport scroll: it takes longer to get where you want, but it’s free to do it!

Also, don’t spend coins to buy resources (like carrots) for your followers or anything of the sort. Try to keep your money for what really matters: buying upgrades to get stronger!

Destroy everything in all areas

Once you unlock the third follower in your party, everything on the maps will be relatively easy to destroy. Make sure to do so and methodically crush everything that can be crushed.

This way, you will get all the resources available in the game and with things so difficult to collect, you do need them all!

Sure, this is a really boring task, but it has to be done, so make sure you don’t miss anything. This way, it will be easier for you to “summon” new followers if they get killed and have enough resources for everything.

An important thing to note is that it seems that opponents respawn every now and then, while resource items apparently don’t. But even with enemies only, it’s still a good idea to revisit completed areas regularly in order to get some more resources.

Even if Poopdie’s health is filled to the maximum, you should still hit the healing button in the lower right corner in order to keep your followers in top shape and health.

Unless you have some health scrolls, the skill can only be used after a cooldown period – it’s a good idea to plan ahead and go into a tougher battle with the skill ready to use and with your followers with maximum health in order to minimize losses.

Return to the City to Feed Edgar

Even though most of the characters you have in the city (or main area or whatever) can be accessed through the menu, one very important one is not available: Edgar.

As a result, you will have to revisit the main area every now and then and go talk to Edgar in order to feed him the loot you pick up from your defeated enemies in order to receive some solid amounts of money.

There is no need to do this very often, but remember to do it regularly as those pouches with cash will make your life (and upgrades) a lot easier!

Get those Speecial Skills ASAP

In the Necromant’s Laboratory, you can purchase skills and/or upgrades for Poopdie himself or his followers. You’ll get hit with the need to spend premium currency on them really fast, but the first level is available for coins only.

For the first few upgrades, I recommend this order: get a new follower first, as strength comes in numbers, then purchase the Increased Damage skill for them.

But afterwards, focus on getting Poopdie’s special skills: start with the one in the middle that gives extra attack power to your followers, followed by the one that freezes enemies.

If you use these two skills in a smart way, you can easily go through most battles without a single loss. Just freeze enemies first, power-up your minions immediately afterwards, attack and repeat.

I like the fact that the game doesn’t bombard you with ads, but instead gives you the chance to watch one every now and then in order to get some free coins and goodies.

You can watch one for 9 free coins in the store, but you will also encounter some characters that offer you to watch an ad for a nice reward: make sure you always acept the latter, because you’re getting a lot of value for watching the ad. Plus, you’re helping the devs too!

Learn the obstacles and how to tackle them

Apart from the enemies, there are all sorts of obstacles that you’ll encounter during your adventure. While most of them are harmless and only require more or less time to be destroyed, some of them are not.

Learn what each of them does and use them to your own advantage if possible:

– the large, green stomach-like ones, for example, will release a gas that can affect enemies as well. Go near it and then move away, luring enemies there and you’ll get a helpful hand for free!

– another example is the round thing that explodes and spawns an enemy if not destroyed. You will be tempted to destroy them before this happens, but if you do, you won’t collect any loot. Instead, let them spawn enemies and destroy them to make more coins.

The same thing goes for all obstacles in the game: learn what they do and especially what you can do to get the most out of them since in most cases simply destroying them all might not be the best approach.

Lure in enemies for easier fights

If you’re meeting large groups of enemies, it’s always a good idea to try and lure them away from the group to take them out easily.

You can do this with your main character: get close enough until you draw the attention of one or two enemies, then quickly move away. The enemies will follow you, leaving their teammates behind.

Take them out one by one (or two by to), then go back and use the same strategy. This way, it will be much easier to keep your units alive and save the valuable and already rare resources.

The game’s very linear, so there’s just one way to go

Like in all RPGs out there, you will have to do a lot of walking around in order to progress through the story.

The game itself is extremely linear and even though there will usually be some sort of shortcuts that you will be able to unlock (usually after getting past a specific part in the game), Poopdie’s story is very linear and there’s just one way to go: forward.

Make sure to always look at the map in order to see where your next objective is, then head straight to it. There’s usually a long road that you need to follow, but with minimal (if any distractions).

As long as you put the tips above to good use, you shouldn’t have any trouble going through the story easily and enjoying the game for free. It’s not going to be easy and there’s a lot of grinding involved – but most games nowadays are like that anyways.

These would be our Poopdie tips and tricks for fellow players. If you have additional strategies that worked well for you, don’t hesitate to let us know!