Home Guides Pokemon Sword and Shield: How to Find and Catch Galarian Articuno

Pokemon Sword and Shield have been expanded almost a year after its release with The Crown Tundra expansion, which not only brought a brand new region to explore but also tons of new Pokemon to catch, including plenty of iconic Legendary Pokemon from past entries, such as the bird trio Articuno, Zapdos and Moltres from the classic Pokemon Red and Blue.

Here’s how to start the questline focused on the bird trio and how to find the Galarian Articuno.

How to Find and Catch Galarian Articuno

Before being able to actually find the Galarian Articuno, you will need to start the Legendary Birds questline. To do so, you will need to go to the south of the Crown Tundra, to Ballimere Lake, and then reach Dyna Tree Hill, which is located on the eastern side of the Lake. After the cutscene plays out, you will be able to find and catch the three Legendary Pokemon.

Once Galarian Articuno appears in the sky, follow it to the top of the slope and then to the hill on the left. Here, the Pokemon will split into three: the real one is the one that opens its wings, so make sure to follow it. After a short while, the Pokemon will get on the ground, and the battle will begin.

Galarian Articuno is a Psychic, Flying Pokemon, so make sure to have Pokemon with you that can deal Electric, Ice, Rock, Ghost, or Dark damage. You do not want to take out the Pokemon, however, so make sure to stop your offensive once its HP is low to catch it. 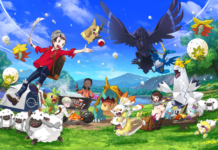 Pokemon Sword and Shield: How to Get an Ability Patch