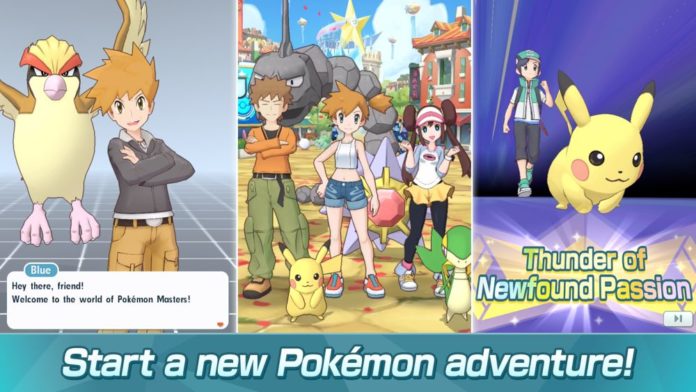 Pokemon Masters has finally been released globally and players worldwide can now experience the Pokemon world like never before. And we’re here to help you improve your game by sharing some Pokemon Masters tips and cheats in our complete strategy guide.

The game itself is extremely complex, so there are many things to take into account – and even more to focus on when playing – but we will talk about them all in today’s guide, as well as future guides to be published at a later date.

But let’s take things one step at a time. Now, we’re looking for a general guide, so let’s just get it started! Here are our Pokemon Masters tips and tricks for the amazing mobile game.

How do the Sync Pairs work?

Pokemon Masters introduces the Sync Pairs, which are basically a Trainer and their Pokemon. These can be considered the “characters” in the game as you can’t have a Trainer without their corresponding Sync Pair.

Each Sync Pair belongs to a specific element, and each element follows the rock, paper, scissors rule, meaning that it’s strong against an element and weak against another. So your main goal in all battles will be creating a team that has the elemental strength against the enemy (but more on that later).

Each pair also has a number of stars associated to them: the higher the star number, the more levels they can go up. However, even a 3 star Sync Pair can be evolved to 5 stars, so with a bit of planning and a lot of grinding, you can turn your favorite pokemons into truly amazing fighters no matter what their starting star number is.

Finally, each Sync Pair is built in such a way that it will have a role in the game: Attack, Support and Tech. While the first two are pretty much self-explanatory, the latter might not be as obvious. So here are a few words about each role that the Sync Pairs have in Pokemon Masters:

Attack (fist): This is the offense team. They usually have high Attack and Special Attack ratings, but low health.

Support (heart): They are healers or boosters of other Pokemon skills. They usually have higher health that Strike teams, but do less damage. However, this is countered by the fact that they actually restore health and/or boost stats.

Tech (exclamation mark): Also sort of a support Sync pair, these teams will usually focus on influencing the battle by applying various negative effects to the enemy.

The maximum level for Sync Pairs in Pokemon Masters is set at 100 at the moment. To get to that level, you will need a 5 star Sync Team.

How to build the perfect team?

We can’t really talk a lot of strategy when it comes to building up your team, since there’s just three of them going into battle. Still, there are a few things you should consider:

– Usually, having a balanced type of team works best. This means that you should try to have at least two different elements – and always try to have the recommended ones, strong against the type of enemy you’re facing.

– It is also a good idea to bring 2 Attack type Trainer/Pokemon pairs into battle and a Support type. While I usually prefer a healer/booster type of pair, you can experiment with Tech based ones as well.

Train your Sync Pairs more than just by leveling them up

The game is very complex and just leveling up your Sync Pairs will not help them max out their potential and become as useful as they can be, although this is the main thing you should be focusing on.

Apart from leveling up, the most important thing you should do to increase the overall strength of your Sync Pairs is unlock new abilities / moves. You will need Training Machines of various rarities and, as well as Aid Ade bottles – but early on, things will be easier and requirements low.

Only focus on the pairs you’re actually planning to use a lot because investing in Trainers and Pokemon you will not use is just a waste of resources. If nothing else, just look at the rarest Sync Pairs you have (more star numbers) and focus on those first.

Strive to have top Sync Pairs for each element

This is your ultimate goal: to have a top Trainer / Pokemon Sync Pair that is maxed out for all the elements available in the game.

Now, this is really difficult to get early on and even later in the game, you will still have some trouble getting it done.

But you should focus on the elements that you will be needing more early on, and you should still be OK. These are the starting elements of the Pokemon you get when starting the game: Electric, Water, Grass and Rock. Then, as you progress through the stages, move over to Flying and Fire.

This will still give you a solid amount of options whenever you get into a battle.

Go through the Sync Pair stories for free Diamonds

A very easy way for you to get some free Diamonds with very little trouble is to go through the Sync Pair stories from the Explore menu. You will only have to go through some bits of text and give some answers, but the entire process is pretty fast and easy to go through.

Also, you should do your best to go through all the Training missions as well – and as fast as possible, as you can get some amazing rewards from there as well, rewards that will help you progress a lot faster.

Some of these Training Missions can only be completed a limited number of times per day – but by all means, focus on doing these all first every day before anything else in order to develop all your Pairs fast.

Auto is better than not doing anything at all

Like some other games do nowadays, Pokemon Masters also offers the option for you to turn on the “auto” mode and cruise through the missions and stories faster.

And even though the Auto mode has its limitations and will never match a player’s ability, it is still a decent choice if you already have the upper advantage in battle (as it usually happens in early missions) and you have something else to do.

As I am writing this guide, I keep the game running on Auto for a bit of extra progress. You will still have to tap every now and then to select answers, start a new missions and other things like that, but for the most part you don’t have to do anything.

So whenever you get the chance, take advantage of the auto feature in order to progress faster while doing something else in real life. But don’t expect it to work too good when things get too complicated, like when you’re fighting against more dangerous opponents.

We can’t have a Pokemon game without some sort of evolution involved and in this case, some of our furry friends can evolve and get even better in the long run.

As you can imagine, evolving your Pokemon is pretty expensive and you won’t be able to evolve them all (or at least not anytime soon). Instead, focus on the ones that you use the most often in battle and have the higher number of stars.

How to win your battles

I think that we’ve covered most of the general things until now – and it’s time to get to the more fun ones: winning all your fights!

Fortunately, things are pretty much straightforward here when it comes to getting an advantage in battle and you should only pay attention to a few very important things:

– First and most important is bringing the correct Pokemon types into battle. You will always be shown what type of elements you’ll be facing, so make sure to select Pokemon that are strong against those types.

– Next, whenever you enter battle using your highest level Sync Pairs, you should start focusing on taking enemies out one at a time: this is the best choice because an enemy with even 1% health left can still deal a ton of damage, but a dead one is out of the battle completely.

When trying to get rid of a Pokemon in battle, if some have a lot more health than others, it’s almost always better to focus on the easy targets first and leave the more difficult one last.

– Finally, know what your Pokemon and Trainers can do. Know all the skills your team member shave and use them at the right time, on the right enemy. Remember that there are 3 different types of ultimate attacks you can use and selecting the correct one can really change the course of a battle!

Finally, when you’re in a battle, don’t forget to tap the settings icon in the upper left corner, where you can activate or deactivate some important features like the Action Order (which shows a list of all actions and the order they’ll occur in), as well as control over the speed of battles and more:

Additional things to consider when playing the game

Now here is a set of some random types of advice that will help you get better at Pokemon Masters:

– Log in daily to collect your rewards. If you have just started playing the game, don’t forget that the rewards offered to new players daily are extremely good and you don’t want to miss out on them. So even if you don’t have time to play, at least log in to grab those rewards!

– The first five star sync pair that you unlock – the Rosa / Snivy Pair – is actually a very solid one that you will use constantly, so it doesn’t hurt to invest resources in getting them better.

– Once you unlock events in the game, it’s a good idea to focus on completing those (or getting as far as possible) because you’re up for some better rewards from them.

– Keep an eye on the missions, especially the Daily missions: there are some top rewards to be won there, although some might not be worth the trouble at times.

– If possible, try to hoard up 3,000 Diamonds and go on an epic 10x Sync Pair Scout. While this doesn’t offer any discount over getting the scouts individually, some players say that you tend to get better results if you go for the bulk buy.

So if you are patient enough to wait for getting to 3,000 or if you spend some money on the game, it’s worth trying.

These would be our tips and tricks, but there are many more articles coming soon – so stay tuned! Until then, if you want to add something extra to our guide, don’t hesitate to do so by commenting below.