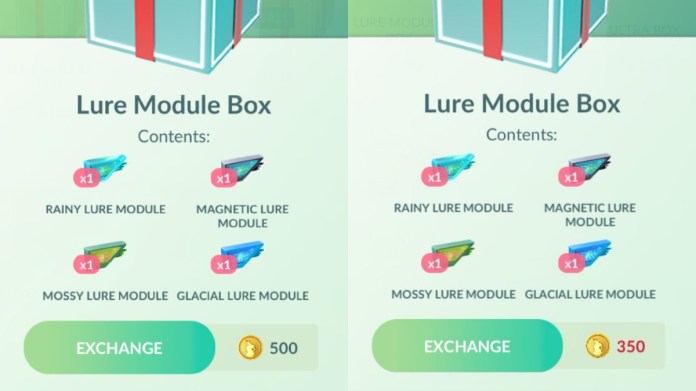 Pokemon Go gives players an extra chance of catching one of the over 200 Pokemon available in the game with Lure Modules. These lures are available in a few varieties: Normal, Glacial, Magnetic, Rainy, and Mossy. Each attract different types of Pokemon, or can help evolve certain Pokemon into a corresponding type related to the Lure type. Players can obtain these lures as rewards for leveling up and by completing Special Research Tasks. They are also available to purchase in the Shop. The Pokemon Go community on Reddit has recently been discussing the prices of a Lure Module Box in the Shop, and they’ve discovered some shocking news.

Some players have discovered that the price of the Lure Module Box varies drastically from player to player. One Redditor discovered the price to be as much as 700 PokeCoins for some and as little as 300 for others, but no one seems to know why the price differs so much between players.

One Redditor explained how they were shocked to find the Lure Module Box priced at 600 PokeCoins, while their partner, who plays just as much as them, and in the same areas, has a box offered at 350 coins. The discrepancies don’t seem to make any sense.

Players wondered whether it varied country-to-country, but after some exchanging of info, they realized that this too was not the case. One player in Colorado, USA was charged 350, while for another in Illinois, USA, the price was 500.

Player level was also discussed as a possible cause for the variation in price, but that too was quickly debunked. It seems that there is no reason for the strange pricing. Another Redditor pointed out that this sort of odd pricing has happened before with the Hyperbox. The Hyperbox came in Gold or Purple, with the gold being the most expensive (1480 coins to the Purple’s 1380 coins). However, the items inside did not reflect the price at all. In fact, the Purple Hyperbox contained far fewer items than what players considered worth the price, especially compared to the Gold Hyperbox.

Hopefully Niantic will streamline their pricing—until then, it is doubtful that players will bother purchasing these bundles.