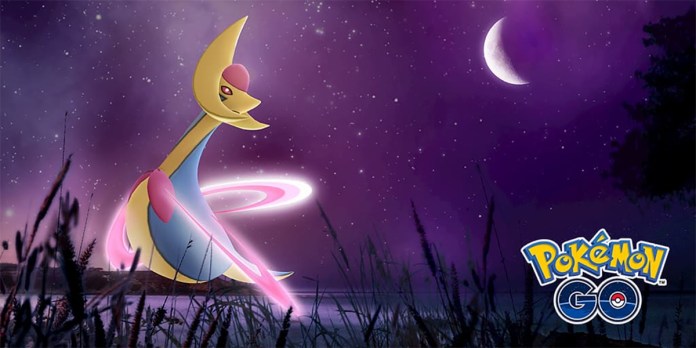 Cresselia, a psychic type legendary Pokemon originally introduced in the fourth generation of Pokemon games is currently being featured as a raid boss in Pokemon Go. Like any five star raid boss, Cresselia isn’t necessarily easy to beat, so let’s take a look at its weaknesses and counters!

As a pure psychic type Pokemon, Cresselia only has three weaknesses: bug, ghost and dark. Outside of rainy weather, bug types aren’t particularly powerful in Go, so it may be best practice to stick to Pokemon with just dark and ghost type attacks, especially if you aren’t using shadow or legendary Pokemon.

Additionally, psychic Pokemon like Cresselia are resistant to psychic and fighting type attacks, so avoid using attacks of these types.

Due to its weaknesses, ghost and dark Pokemon make up the heft of the best Pokemon to use against Cresselia. Assuming that you’re not dodging and are using level 40 Pokemon, Cresselia’s most effective counters (with the strongest at the top) are as follows:

Chandelure stands out as a particularly effective Pokemon that doesn’t require the use of mega energy and is much easier to obtain than good copies of shadow or legendary Pokemon. Keep in mind that you’re limited to one mega evolution per team and that—if you do choose to use one—megas boost the damage of Pokemon that share their types the most.

If you’re looking for counters that are more available to newer players, here’s a list of the best counters excluding mega evolutions as well as shadow and legendary Pokemon:

Bear in mind that these Pokemon won’t be particularly effective if you don’t have ghost or dark type attacks on them. This is especially true of shadow Mewtwo, which needs to run Psycho Cut and Shadow Ball to perform well at all.

Niantic doesn’t disclose shiny rates for Pokemon, but research by players estimates that the shiny rate for legendary Pokemon like Cresselia is approximately 1/20. On average, you will likely find your first shiny Cresselia within 14 raids, but ultimately, shininess is random; you may get a shiny on your first raid and you may still not have one after thirty or more raids.

So How Do I Beat Cresselia

To beat Cresselia, make use of your strongest Pokemon that have ghost, dark or bug type attacks. Bugs tend to perform poorly in Go unless they’re boosted by rainy weather, so you may want to focus on ghost and dark Pokemon.

Provided that you and your teammates are using level 40 Pokemon and you have the damage bonus from being best friends, you will most likely need three people to beat Cresselia. With suboptimal teams, however, you may need more.

That sums up the best counters for beating Cresselia in Pokemon Go!