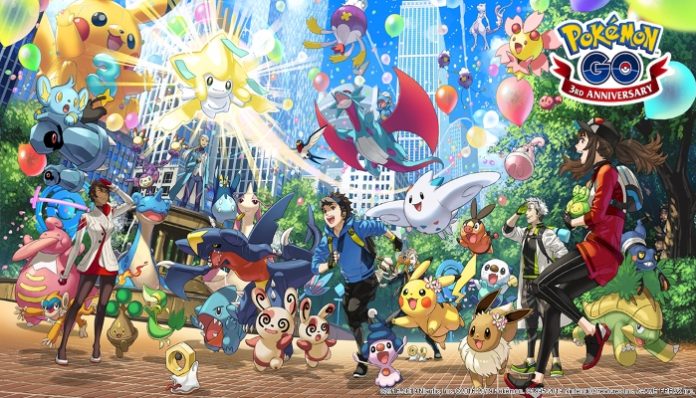 It feels like Pokemon Go just came out a year ago or so, doesn’t it? Well the game that changed the mobile market forever has been around for three years now, as the game is now celebrating its third anniversary!

For veterans trainers or trainers looking for a good reason to come back, this might be it! Pokemon Go’s third anniversary will have lots of goodies and fun events for trainers to participate in.

To start off, shiny Alolan Pokemon will begin to appear throughout summer! Trainers will have the chance to encounter the shiny Alolan versions of Rattata, Sandshrew, Vulpix, Diglett, Meowth, Geodude, Grimer, and Exeggutor.

Trainers have the chance to encounter a special Pikachu wearing a party hat! This little guy can only be found when you take a snapshot in the camera mode. Pichus with the party hat can be found from 7 km eggs.

Raid bosses will be easier to take down, and trainers who participate will be able to use more Premier balls to catch the raid Pokemon. And finally, trading Pokemon will cost 1/4 less the usual amount of Stardust.

The third anniversary festivities will run until September 2, so trainers have the whole summer to celebrate!