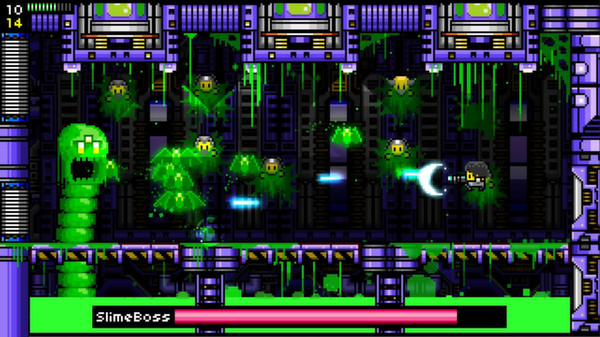 If you’re a fan of classic 2D platform games with plenty of shooting, you would do well in keeping an eye on Rex Rocket, a platform action game developed by Castle Pixel. The team has recently confirmed that it’s currently beta testing the game on iPad. If everything goes well, the game will be released before long on the App Store.

Rex Rocket isn’t exactly a new release, as the game has been released earlier this year on Steam. The iPad release will be the first hendheld release for the game.

Rex Rocket has been inspired by quite a few classic games like Super Mario Bros, Metroid and Mega Man. The influence of the Capcom developed series seems to be the biggest, as players will find plenty of tight platforming and exciting shooting just like the classic games starring the Blue Bomber. Making the game more charming is a retro graphical style that will make all nostalgic gamers quite happy.

Rex Rocket will be released soon on the App Store for iPad. A precise release date has yet to be confirmed but we will let you know more about the matter as soon as more comes in on it so stay tuned for all the latest news.