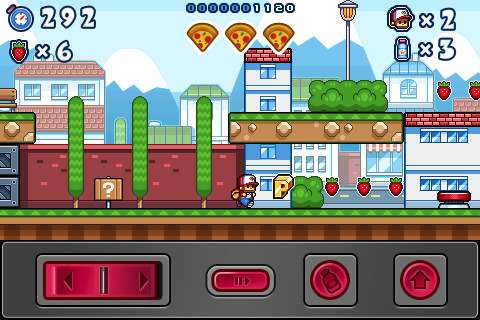 The iOS platform game Pizza Boy, developed by Acne Play, has received a brand new expansion today, which adds a new world and a boss to the game, among many other additions.

The new world, which is called the Ruins Worlds, serves as the backdrop of the new adventure of Pizza Boy, who has to recover all the cheese stolen by Ninja Rat and his minions. Expect to see items to collect, enemies to destroy and more in the new world, as well as a new final boss, the already mentioned Ninja Rat.

The new additions don’t end here. New music has been added in Pizza Boy to go along the new world as well as a downloadable gamepad case for iPhone, which is quite nice especially if you’re fan of this old school inspired platform game.

Pizza Boy is almost a tribute to the 16-bit platform games that were so popular around 20 years ago. The game doesn’t really feature anything surprising, but its well executed gameplay experience will definitely please nostalgics and all those who love a simple yet engaging gameplay experience.