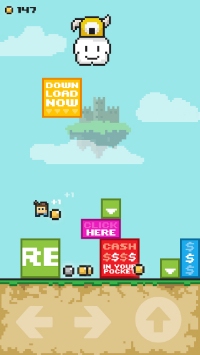 Free to play mechanics are one of the more controversial features introduced in video games in the past few years. Some developers use them wisely so that they don’t get in the way of enjoyment while others are not so smart and fill their games with adds and in-game currency that lock pretty much all of the game’s features behind paywalls.

Wheter you like or absolutely despise free to play games, you definitely won’t be able to hold your laugh with FFFFF2P, a new platform game developed Elevate Entertainment.

FFFFF2P features a satirical approach to free to play games. The main character of the game is a little pixel who has to save Pirncess Pixel from an evil ogre called Ug. The only way to save this princess is by paying her ransom, which amounts to a million of in-game coins.

There are many ways to earn coins to save the princess like avoiding the ads dropped by the ogre, stomping them and more. Or you can just pay $2.99 for a million coins to get out the easy way. FFFFF2P also includes several power-ups that can be obtained by playing or by simply paying with real money.

FFFFF2P will be released on the App Store on July 10th for free. Make sure to check out the game if you like some quirky games that can be played on the go. The game looks like will be a bit on the grindy side if you don’t want to spend real money so it’s better to come in prepared.