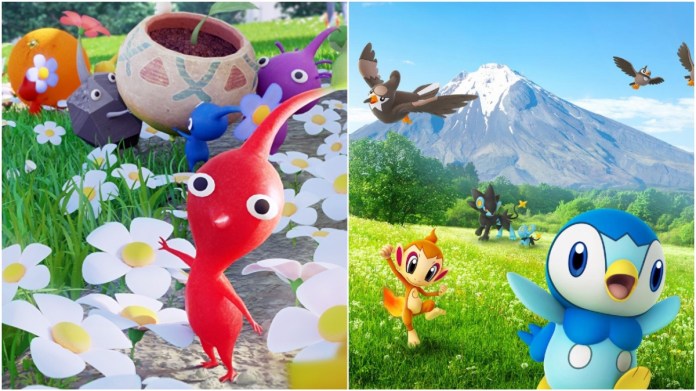 Pikmin Bloom and Pokemon Go are both augmented reality games from Niantic and Nintendo, designed for IOS and Android mobile devices. Niantic has gained previous success with their speciality of augmented reality game such as Ingress, and Harry Potter Wizards Unite, but nothing has been as globally popular as Pokemon Go. The recent introduction of Pikmin Bloom has prompted some mobile gamers to compare it to Pokemon Go, but are the two games really that similar? What are the similarities and differences between the two AR Niantic/Nintendo collaborations?

Pokemon Go was an instant hit when it first arrived in 2016. Pokemon fans jumped on board straight away, and mobile gamers were intrigued by the social and interactive nature of the game. Its popularity grew particularly during the Covid-19 pandemic when certain features were changed to enable play remotely. The growth in popularity for Pikmin Bloom has been slower but it is very early days due to its recent global release in early November 2021. It may not grow to the numbers that Pokemon Go sees as it lacks the decades-old fanatic popularity of Pokemon.

The attraction to Pokemon Go for players is mainly as a video game, although the social nature of the game is a plus. Pikmin Bloom, on the other hand, has a big focus on walking and exploration of different areas. Both games use GPS to track the player as they explore their neighbourhoods but the exercise element to Pokemon Go is meant to facilitate the gameplay. Players walk to find Pokemon and then pause to catch them or battle in Gyms, and the only way it really encourages players to walk is to hatch eggs. Pikmin Bloom, meanwhile, is all about encouraging players to walk without many distractions from the game itself.

In Pokemon Go, players have their mobile device in hand and are looking at their screen for most of the time, waiting to spot a Pokemon, or to see if they are close to a Pokestop or Gym. The game basically asks for the player’s full attention as they play. In Pikmin Bloom the player can walk all around a park and grow their seedlings without looking at their phone once. There are times, of course, when they might check for Expeditions nearby, or to see if their Pikmin have picked Fruit, but these things can be checked once they arrive home. Pikmin pick up fruit automatically as the player walks so there is no need for them to be paying too much attention to their mobile device.

Pikmin Bloom’s aesthetic is more sparse than Pokemon Go, without the extra elements like Pokestops and Gyms dotted about the virtual world. Instead, there are giant blooming flowers, and players leaving petals as they walk, making colourful paths of flowers wherever they go. The game also doesn’t have the competitive nature of Pokemon. There is no big battle against other players’ Pokemon, and no joining teams to compete for top place. Pikmin Bloom actually asks players to team up instead, using combined efforts to plant flowers, or beat Mushrooms and earn Nectar together.

That is the main difference between the two games- Pikmin Bloom is an interactive and aesthetically pleasing pedometer that wants you to walk with friends and get you exploring your city or town. Pokemon Go wants you to focus on play first of all, and walking second. Players may feel, therefore, that it is worth having both games on their phone for those different reasons.

Pikmin Bloom and Pokemon Go are both available to download for free on IOS and Android.