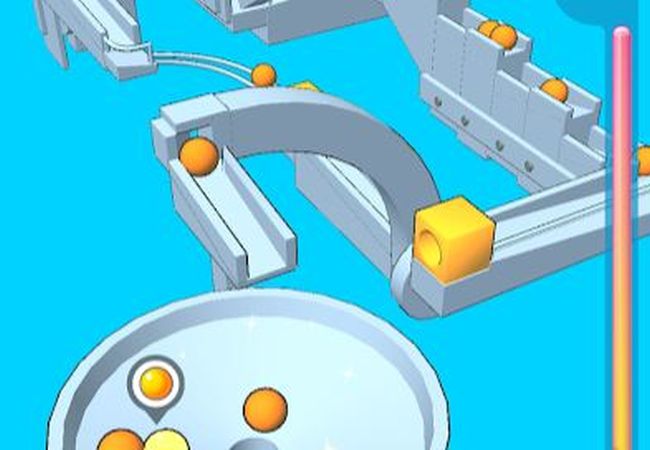 In our article today we are going to take a look at all of the Physics Puzzle Idle tips and cheats that we have for you to pass more levels in the game and to make everything run a lot faster!

The game has some pretty simple idle requirements, so even if you leave the game running for a while, you will still progress through without much struggle! But if you want to set everything up for success pretty early on and without much effort, then you came to the right place!

And that’s exactly why we should not waste another second and dive right into the Physics Puzzle Idle tips and tricks that we have for you right now and get this game guide started!

The very core of the game is to star upgrading all the mechanisms so that you will speed things up little by little with each upgrade, and make a lot of Coins in the process. Basically as soon as you start playing the game, you will begin by upgrading the very first option, which will let you get balls faster.

Always upgrade the highest (and most expensive) feature first

If you are really up for making a lot of profit, then then the best way to do that is to invest all the money you make into upgrading the best features of the mechanism. That means that if an upgrade costs 10 mil and another one 50k only, then you upgrade the one which costs 10 mil first.

Whenever you start a new level you will need quite a bit of Gold to unlock the new add-ons. They stay there for the entire level once you unlock them, so I really suggest that whenever you can unlock a new one, you do it right away.

When you have unlocked all of them, you have basically completed the mechanism. Then, you can upgrade each one as you want, but still I stand by my choice of upgrading the most expensive one first if you want to unlock the next level quickly.

Speed things up by watching ads at start

At the very beginning it can really be a slow process to gather coins and make upgrades, but if you really want to get things started ASAP, then there are a few things that you can do to speed up the process.

I personally always do them all as soon as I have unlocked a new level, because it is the best way to kick things off at the start of a new level. Basically there are these options:

– The flying coin which gives you gold (more about this below)

– The random balls with an extra Coin o top of them

At the very start you will progress much, much faster if you watch ads for every single one of these options because they will give you enough Coins so that you can start unlocking the skills and get on to the next level.

Tap on the flying coins

Every now and then there will be some big Coins flying around randomly across your device screen. These will give you some extra Coins if you tap on them and choose to watch an advertisement because the more you progress through, the more Coins you will get!

I suggest that especially at the beginning of a new level, you should watch an ad for every Flying Coin that you see to get all of that extra free Gold. It will help you because since you are not making a lot, these will add up and make upgrading a lot easier.

In order to activate this buff you will have to watch an advertisement, and for the next 3 minutes you will have the buff active. It’s good to have it active at all times, because it will make a big difference. So don’t forget to activate it from the top left corner of the screen every time that it runs out.

If you are really not sure how else to make a lot of Coins for a big upgrade, then I have the easiest solution for you – go idle! Because this game is an idle game, you will keep on making money even while you are not actively playing.

So basically you can leave the game running while you are at work or school and when you finish, and open the game again, you can claim the profits that you have made offline and start working on upgrades once again!

Watch an ad to double the offline profit

Another thing which is definitely super useful is to watch an advertisement to double the coins that you made while offline. his will make all that time spent offline so much more worth it, because you basically get as much money (if not more) as you would while being active in the game!

Every now and then you will be able to upgrade certain mechanisms for free by simply watching an ad! This is a very good way to save some Coins, so I would suggest that you do it whenever you have it available because it will save you a lot of money in the long run.

The Coins that you save by watching an advertisement to upgrade this can be used to upgrade other features, so I definitely recommend that you do it every chance you get.

Activate two buffs at once!

I am not sure if you noticed or not, but the best way that you can make a ton of money quickly is to have both of the buffs active at once: the 2x coins and 2x speed up! Do this by watching an advertisement for one of them, and then quickly watch the ad to activate the second buff.

The buffs will both last for 3 minutes each, so when you see that one of them runs out, you will know that both of them are running out / ran out because you activated them at the same time.

These would be all of our Physics Puzzle Idle tips and tricks that we have for you right now! Do you know some more useful game tips and strategies? Feel free to share them with us down in the comments section below!