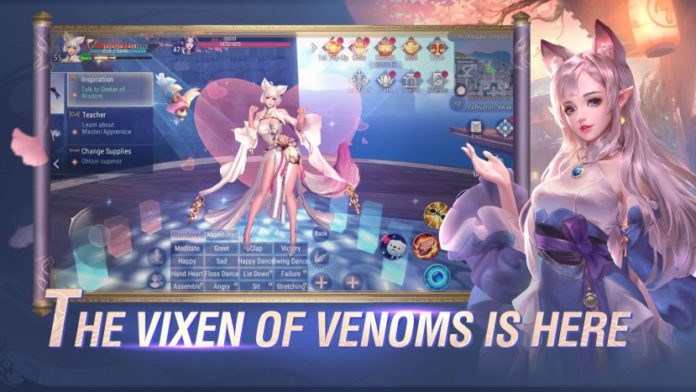 Looks aren’t everything, but when a game is polished to Perfect World Mobile’s pristine level, they count for a lot.

MMORPG aficionados will no doubt be familiar with the Perfect World franchise. Released in China in 2005, it was a rare crossover success, bringing traditional Chinese settings and culture to an enthusiastic western audience when it arrived in Europe and the US in 2008.

Now, more than a decade later, the game has completed the third leg of its long journey and landed on mobile.

Perfect World looks better now than it ever has, with pin-sharp, colorful, immensely detailed 3D graphics, dynamic lighting, and a blockbuster line in explosive effects and visual drama. In a sign of the game’s commitment to gratifying your eyeballs, it even offers you a choice of Instagram-style filters to view the gameworld through.

And what a gameworld. Whether you’re on land, in the air, or even underwater, Etherblade positively pulsates with life. Wildflowers wave in the breeze, shrubs gently rustle, bear-like animals stalk around along with carnivorous plants and all manner of friendly and unfriendly NPCs. There are human players too, inviting you to join parties and so on.

The game’s Chinese origins are evident throughout, in the character models and in the buildings, arches, and strings of hanging lanterns. It looks different from a lot of mobile MMORPGs, and that’s a good thing, though there’s still a bit of inconsistency in the localizations, with some dialogue voiced in English and some in Chinese.

The gameplay will be familiar to anybody who has played an Asian MMORPG on mobile in the last ten years. The campaign sees you completing quests in sequence, with your character automatically heading towards whichever one you select from the menu on the left of the screen. These are basically errands for various NPCs, who dish out nuggests of information and build the game’s story quest by quest.

In contrast with most of its rivals, Perfect World Mobile encourages an unusual amount of direct control. While there is the standard option to let battles play out automatically, turning the game into a sort of extended cutscene, the clear and obvious default is to roll up your sleeves and do your own fighting. Certain opponents even have Mario boss-style attack patterns.

Combat works in much the same way as you’d expect. You move around using a virtual stick on the left of the screen, while your combat moves – basic attack and an array of timed skills – are arranged on the right.

Another familiar feature is the mount, a beast of burden whose job it is to carry you automatically from place to place faster than you can do it on foot. Even the mount is more interactive than you’re probably used to, however – not only do you need to break it in but you have to feed it too.

In any case, using your mount is less tempting in Perfect World Mobile than it is in most mobile MMORPGs since you’ve also got a nifty quadruple jump at your disposal. Mash the jump button while you’re on foot and you’ll vault into the air and fly for a short period, which is a much more enjoyable way of getting around.

As you level up you’ll gain access to Dungeons and Challenges, which you can take on with other human players. This makes for some of the most compelling gameplay in the whole game, as you try to compose the perfect team based on your respective skills and abilities.

Perfect World Mobile gives you a range of characters to play as, including the newly added Vulpine, a powerful animal-oriented warrior (vulpine means fox-like) who can summon a legion of pets.

And that’s not the only new addition. There’s also a freshly minted marriage system, which lets you pair up with a disciple or a mentor and pledge yourselves to each other.

Perfect World Mobile isn’t perfect. The tiny text can be difficult to read on mobile, even on a relatively big handset like the LG G7, and underneath the peerless presentation and the uncommonly interactive gameplay the whole thing sticks to the basic MMORPG blueprint. Not every facet of the game is innovative.

You can download it from the App Store or Google Play.