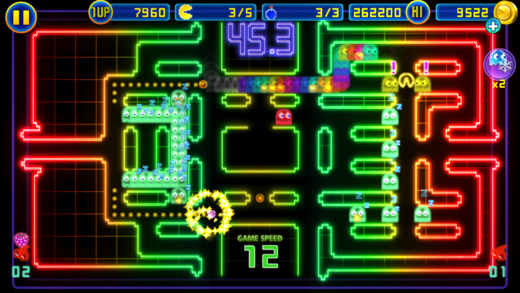 Pac-Man is definitely one of the most famous video games series ever, thanks to its simple yet engaging and challenging gameplay experience. Those who would like to play the classic game on their iOS devices in a more modern form will be happy to know that Pac-Man Championship Edition DX will soon be released on the App Store. The game has been soft-launched on the New Zealand store a few hours ago meaning that it will soon become available everywhere else.

Unfortunately the new version of the game comes with a few issues. Instead of being a premium game, Pac-Man Championship Edition DX iOS is actually a free to play title, coming with timers for both lives and bombs. This will definitely be a problem for those who would like to play the game over and over without having to wait for their lives to be restored.

When compared to the console version, Pac-Man Championship Edition DX also features some small changes in the level design but nothing too major. Controls have also been changed for obvious reasons.

Even though the timers might be a problem, Pac-Man Championship Edition DX seem to be just as fun as ever, thanks to a few new features that spice up the classic Pac-Man gameplay formula in some really interesting ways.

Pac-Man Championship Edition DX is now available on the New Zealand App Store. We will let you know when the game becomes available everywhere else as soon as possible.