Heroes from all eras throughout time collide in Otherworld Legends, a fast-paced roguelike brawler. Fight through hordes of enemies across exotic locales and find out why you have been summon to the otherworlds. Slay enemies using a variety of powerful heroes, including knights, engineers, monks, archers, and more!

In Touch Tap Play’s Otherworld Legends tips and tricks guide, we will go over the combat system and how to use your character effectively. We will also share some survival tips with you as well, so let’s get started with our Otherworld Legends cheats, tips, and tricks strategy guide to survive the otherworlds!

Preparing to Enter the Otherworlds

After you complete the short tutorial, you will wake up in the central hub before you can jump back into exploring the otherworlds. You get to choose your character here, but since the other characters cost real money (save for one), you will probably be using Quan Huying for a while.

You are now ready to depart on your first real venture into the otherworlds!

Otherworld Legends is a pretty clear-cut roguelike. Each zone is segmented into rooms on a grid, and you see your location at the top right at all times. Any room marked with a question mark is one you have not visited yet.

To advance to the next zone, you need to find the gate that will take you there. Explore the zone until you find it, but of course there is going to be lots of opposition standing in your way.

Quan is a short-ranged melee fighter who prefers to brawl with her enemies up close. Her standard attack combo has very short range but is very quick and powerful. Her starting skill, Tiger Charge, unleashed a powerful palm thrust that deals massive damage.

Get a feel for the combat flow in Otherworld Legends as you fight through the beginning easy monsters. You have a basic attack, primary and secondary skills, and a dodge maneuver.

It is important to keep in mind that a single hit – no matter how much damage you take – will make you stagger, and carelessly throwing yourself around and spamming attack is a surefire way to get yourself caught in an enemy’s combo.

To avoid getting hit too much, make liberal use of your dodge. It has no cooldown so you can use it as much as you like, and you are invincible during the middle of the animation.

If you are going to town on an enemy but you notice that one is sneaking up behind you, always remember that you can cancel out of any attack animation by performing a dodge. You will flash white to indicate that you dodged out of an attack – this can prevent nasty damage on you, so make sure to use it often!

Each character has health and armor bars. Armor is your first line of defense – getting hit will reduce your armor, and when it is fully broken a nova will shoot out of your character pushing back nearby enemies and dazing them.

Armor regenerates on its own so as long as you do not take any further damage. Getting hit with your armor broken will result in you losing health, and losing all health will bring your journey to an end.

Slaying enemies will sometimes cause them to leave behind health potions. You cannot take these with you, and they are used on the spot. However, your character will not drink them if they are at full health, and they will remain until you go to the next level.

Try to remember where they are. If you head into a room and take a beating from the monsters within, you can retreat to a previous room and drink the health potions laying around.

Like many roguelikes, you will find lots of different weapons and trinkets during your journey in Otherworld Legends.

Weapons amplify your character’s offensive stats, boosting their damage, crit hit rate, and attack speed. Most importantly, weapons also come infused with items that grant special abilities. The higher rarity weapons can have up to four slots for items.

Speaking of items, how do they work exactly? You will come across items in treasure rooms and shops. Items grant you special powers like making your attack ignite enemies, summon animal allies to attack your foes, or drop bombs every time you dodge.

You can freely switch out items as long as you are not in combat, and finding the right items to compliment your character is the key to success.

When you get to the later areas, you will come across enchanting stations that allow you to infuse items into your weapons, or remove items from them. With some careful planning, you can create some truly powerful equipment that will push your character to their limits.

Quan Huying, as we mentioned earlier, is the starting character and the only character you will be able to play as for quite some time. Because of this, we figured it may be helpful to get ideas on how to build her.

After playing a couple runs as her, we have found a good selection of items that really compliment her playstyle.

The first item you should try to get is Nitroglycerin, which increases her base attack speed. This is a great universal item, but it is especially good on Quan.

Boxing Gloves is another great item, as they give you a small chance to daze enemies on hit. Dazed enemies are stunned and cannot act, rendering them completely helpless against your assault. Fast attack speed means this will trigger much more often!

Dracula’s Dentures gives Quan some much needed sustain. The dentures basically grant you lifesteal, and with fast attack speed you can keep on assaulting enemies to stay healthy.

Finally, the Onimusha Mask is also a great item for Quan. This items makes successive attacks increase your attack speed, so when you really get going you can just absolutely decimate enemies with normal attacks thanks to her Shadow Strike passive. Combine this with the rest of the items and you can make Quan an absolute beast!

This is just a starting recommendation – feel free to experiment with all sorts of items and see what works for you.

The better you do, the more you will be rewarded with special currency. The shiny diamonds are Soul Gems, which is used for purchasing drinks from Mary’s bar and stuff from Chih Mei’s shop.

The blue gems are sapphires which are used for unlocking new skills and variants for your characters. The red gems are rubies which we have not quite found a use for.

After a couple of runs, you will eventually be able to unlock new skills for Quan. Once she hits level 3, you can also talk to Khan near the mailbox to set a secondary skill.

Secondary skills behave a little differently than primary skills. You can set any of your skills to your secondary slot, but you cannot set any variants – it must be the base skill. In addition to that, secondary skills cannot be changed freely during a run, as you must talk to Khan to change them at all.

Once you accumulate 320 soul gems, you can acquire the only other unlockable character with in-game currency, Ginzo. The other characters must be purchased with real money.

That is all for Otherworld Legends! If you have any other tips or tricks to share, let us know in the comments below! 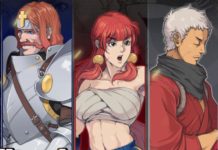