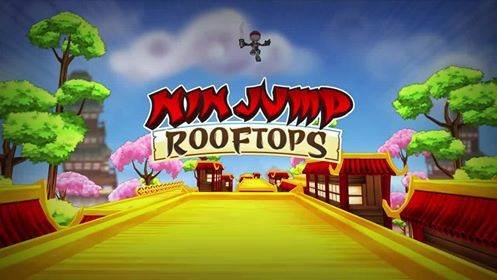 Ninjump Rooftops has just been released to the delight of the fans of the series and we are here to make your life easier in the game by sharing a bunch of Ninjump Rooftops cheats, actually a series of tips and tricks that will make your game better and help you stack those coins and go as far as possible. Although there’s not much in terms of new mechanics for veteran players of the game, beginners will surely find our Ninjump Rooftops tips and tricks extremely useful, so let’s get this going!

1. Go for combos
You get a nice boost if you destroy three similar obstacles in a row (squirrels, birds or ninjas) and it should be your top priority to do so: simply continue to attack the ones that you already have until you get to three and just jump over the other ones. Easiest to get is the Squirrel, but any of them has the same effect: gives you an invincible ride forward.

2. What upgrades to buy
Upgrades are extremely important in Ninjump Rooftops and some can be very helpful during your run. Shield is clearly the most important of them all because it basically gives you an extra life for free. Therefore, make sure to save your coins and take it to at least level 2 early on and always make shield the first upgrade you improve. Also, Super Size is a good upgrade since it’s similar to the shield, but it wears off after a time which makes it less useful. These two should be your priorities when it comes to upgrading, though.

3. Try to learn the routes
A nice thing about the game is that the levels won’t change with each play. And even though enemies might spawn in different locations, what matters: the rooftops, will always come in the same order so it would be best to try and remember the one that works best for you, or at least explore a bit first to find the best option for future runs

4. Boosts to purchase
Basically, boosts are not very useful early on until you are really good with the game, otherwise you will just waste coins and not get your investment back. Probably the free revive is the best option for you, even though it’s not that free since it costs 750 coins. However, if you’re planning on going for a high score and you are low on jades for a revive, that’s the boost to start the game with.

5. Master the double jumps
Or triple jumps, when you have that power-up. Basically, the art of double jumping is the only one that you need (except for quick reflexes) to succeed at this game. Ninjump Rooftops is a lot easier when you can double jump correctly and when you’re supposed to (like when it comes to collecting coins or avoiding obstacles) and that should be the first thing you’ll want to get good at.

And that would be it in terms of Ninjump Rooftops tips and tricks. There’s really not much to say and the entire game is a skill based one, but I am sure that these few tips will make your game even better.