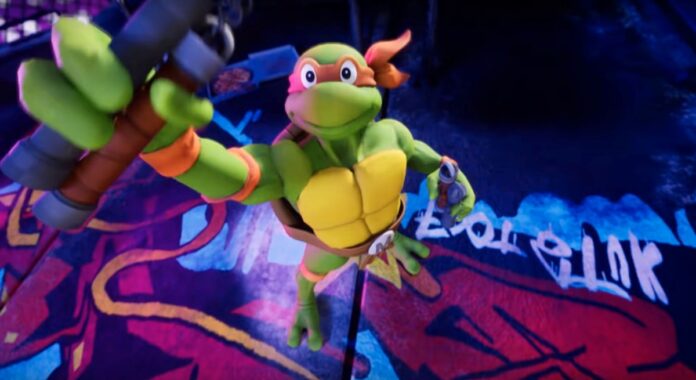 Michelangelo has put his pizza down for a moment to play in the Nintendo All-Star Brawl! The laid-back turtle is recognisable by his orange face mask, and can usually be found skateboarding along the city streets. As the youngest of the ninja turtles, Mikey can often be quite immature but he has natural skill and talent that he can bring to a fight!

How to Play Michelangelo

Mikey is a rush-down type character, enjoying close combat and making the most out of forcing opponents into sticky situations. He has limited ranged moves but makes up for that with his combos of fast-paced close combat attacks. He has his grappling hook to help him bring his opponent back to where he wants them to be. Mikey brings a simple stage with him- ‘The Technodrome’, a medium-sized stage with three moving platforms.

Mikey’s Light moves are: ‘Nunchuck Strike’ (Neutral), ‘Fist Pump’ (Up), and ‘Air Guitar’ (Down). His Light Air attacks are ‘Shielding Strike’ (Neutral), which deals damage from above and from the side, ‘Helicopter Strike’ (Up), and ‘Snapback Strike’, dealing damage from below and a little from above. Michelangelo gets his trusty skateboard out for his Light Dash attack ‘Skateboard Ram’.

Mikey’s Strong attacks utilise his expertise in nunchucks. His Strong Neutral is ‘Wild Swings, his Strong Up is ‘Handstand Kick’, and his Strong Down is ‘Split Slam’. All these moves are very effective when combined with Light attacks.

Michelangelo’s Strong Air attacks are: ‘Dual Strike’ (Neutral), the wide-ranged ‘Sweeping Kick’ (Up), and ‘Aerial Split Slam’ (Down). His Strong Dash is ‘Rear Tackle’, slamming his shell into his opponent as he dashes backward.

Mikey really brings the party to the All-Star Brawl with his Special moves. ‘Wanna Pizza This?’ (Neutral), sees the turtle fling pizzas at his opponent and an extra slice then falls off the projectile which can also hit the opponent. His Up Special is ‘Turtle Line’ which shows him throw a grappling hook at opponents, and when it hits it pulls the opponent in. This move can also save Mikey from falling off the stage. ‘Party Dude’ is Mikey’s Down Special and has him spinning on his back, damaging any opponents he comes into contact with.

Finally, as Michelangelo’s taunt move, what is better than chowing down on a slice of delicious pizza? Too bad there’s none left for the dazed opponent!

Tell us in the comments if you have discovered a great combo for Mikey. 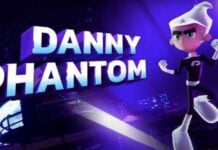