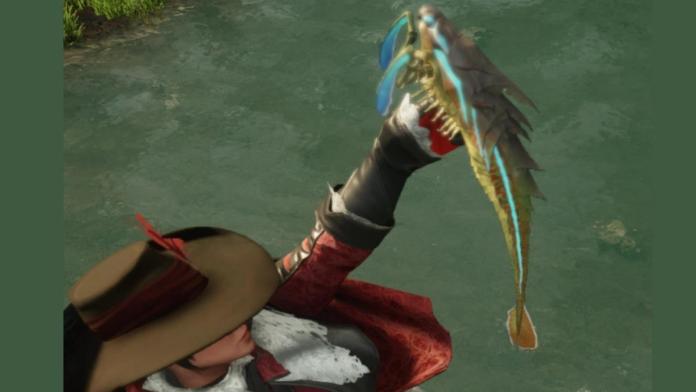 In New World, players can take up relaxing gathering activities when they’re not busy fighting off fantastic beasts. One such activity is fishing, where adventurers can take a load off and just enjoy some nice lake-side fishing. Every gathering activity has a quest line you can follow for special rewards, and today we’ll be looking at where to catch Azoth-Tinged Fish in New World.

The fishing quest line consists of 15 different quests, with most of them asking you to catch specific fish. It may seem like a hassle, but it’s very much worth doing if you’re into fishing, as completing all 15 quests will reward you with a Legendary Pole Reward Box.

Azoth-Tinged Fish is the 12th quest in the quest line, and it’s given to you by Rory Davies in Edengrove. Before you can get this quest, you must have already completed the previous quest in the chain, Soulwarden Rations.

Rory will ask you to catch an Azoth-Tinged Fish and deliver it to Konrad Bernard in Shattered Mountains. The quest will tell you that you can catch these fish right in the waters next to Rory, but you might not have too much luck with that.

Instead, you might have better luck if you look for a nearby fishing hotspot. There’s a 1-star hotspot that usually spawns relatively close to Rory, and it’s located around here:

Related | Where to Farm Wyrdwood in New World

It doesn’t have to be this exact hotspot, but this is the one that is usually up. Just about any 1-star hotspot will do. If you’re still having troubles catching the Azoth-Tinged Fish even at the hotspot, we recommend leveling up your fishing or using some bait.

That concludes our guide on where to catch Azoth-Tinged Fish in New World. If you have any other tips or questions about this quest, let us know in the comments below!