New Star Manager is a game like no other and you’ll fall in love with it as soon as you start playing. Created by the same brilliant mind behind the equally charming New Star Soccer, New Star Manager takes things to a whole new level, providing an unprecedented experience on mobile. And we’re here to help you get better at it by sharing some New Star Manager tips and cheats in a complete strategy guide.

Because New Star Manager is as difficult as it is amazing. It still has its problems and shortcomings, but if you play your cards right (literally) and you keep on playing, you’ll become the ultimate NSM master.

So let’s get started – there’s a lot to talk about in today’s article where we’ll be sharing some New Star Manager cheats and tips to help you lead your club to success!

Keep your staff happy
Happy players and staff, good results! That’s the first thing that you should have in mind and there are some tips and tricks to do this easily.

Each staff member has various needs – from getting minutes on the field to increasing their stats and being part of a team that keeps on winning. And most of these needs are easy to be taken care of.

Rotating players on the field will not only be a must when they get tired, but also to keep them happy. Don’t forget to give the substitute keepers some play time as well (usually just 2 are enough here). Try to keep all the players happy by giving them minutes in the game.

Set up as many friendlies as possible before the season starts, so that you can easily rotate some players that are upset and normally not getting any play time. Easy way to keep them happy!

Another trick that you can use – this one is when it comes to their own development – is to wait for their unhappiness to go as close to the limit as possible and then train then. That will reset your unhappiness and will give you more time. All in all, keep an eye on their needs and make sure that they are happy!

Look at potential development
The potential skill of a player is what matters the most in New Star Manager. This makes players with a lower starting skill more valuable in the long term because they simply can be developed into better players (and this will usually happen relatively fast). 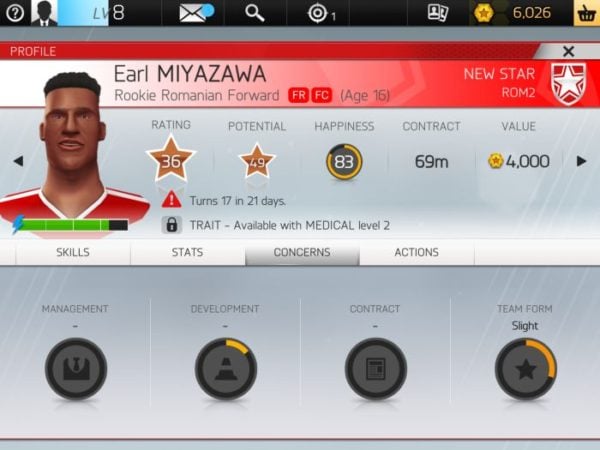 When you start a game, you will have lots of low star players and you might be tempted to quickly invest your money in buying older players with higher stats. That’s not a good strategy, because money is difficult to make in large batches in the game.

Instead, it’s better to simply take your time and develop your existing players. You will soon start getting youth players as well who will generally be much better than the ones in your starting squad. So be a bit patient, focus on playing the ones with high potential skills and slowly get rid of the others, while keeping your money for upgrading the facilities instead as they are extremely helpful in the long run.

Take your time on the field
After starting a match, whenever you have an event, you should really take your time and plan your players’ moves carefully. It took me a while to realize that I can – and SHOULD – actually control all players on the field (or at least a few of them), creating open spaces for my strikers and setting up solid moves.

As soon as you will start planning and giving instructions to more players on the field, everything will be a lot easier. So take your time to plan each phase of your attack in order to get that ball behind the net more often than not.

Having in mind that you unfortunately can’t cross the ball in this game, exploiting the flanks is rarely a good idea. I had more success by instructing players to go to the flanks instead, drawing defenders after them and charging head-first through the middle. If the defenders don’t follow my wings – then they get a ball and dribble towards the keeper.

Update: It seems that you actually CAN cross the game in NSM (thanks to New Star Games for pointing this out). Crossing works like shots – so being able to aim them requires a bit of practice, but we’re on to this as it opens up heaps of opportunities for east flank attacks!

It matters how you hit the ball
Even after getting that much needed one on one situation with the goalkeeper, you’re still not guaranteed to hit the net. You also need to tap the ball and do so in the right way in order to increase your chances of playing.

Hitting the ball in the center will send it in a straight line, while hitting it lower, higher or to any of the sides will make it gain some vertical distance or curl it. So depending on your position and the direction you’re shooting at, try to also hit the ball in the right spot in order to squeeze it past the goalkeeper.

And be prepared to hit the post. A lot. Very often. That happens too!

Listen to your assistant
I usually trust my assistant with my job. I let him pick the squad (since he always chooses the players with the best energy) and only play a bit with the substitutes, since he likes to bring in two left fullbacks and two right midfielders as subs and I prefer to have more areas on the field covered.

I also trust him in most cases when it comes to tactical advice: if he says that we should work harder, I increase the meter and do the same if he recommends a change in style. I think you should do the same, especially since you can’t really see how the game’s going.

As for the starting tactics, this is my strategy: I play a balanced or attacking strategy when facing teams of a similar value, I go attacking or direct when facing weaker teams and when I’m the weaker one, I use counter. Almost always – except for when playing against weak teams, I instruct my lads to work a bit harder than average. It uses up more energy but gives me more events to play.

A good indicator of you choosing the right strategy for the match is the number of events you have: the more, the better your tactic against the current team. So if a lot of time goes by and nothing good happens, it’s definitely time to change your style and work rate.

Upgrade your Facilities
As I was saying earlier, upgrading your facilities is extremely important and it should be your long term plan to get them as good as possible.

Each facility is important, but I would personally recommend focusing on improving your Store and Stadium first, then your training and fitness centers, followed by your youth team and ending with medical and scouting.

Also get good staff – the better the staff, the better the cards they produce, but be patient and let the contracts expire for those already with the team as sacking them usually ruins morale in the squad. So if you’re not getting a super staff member you’re sure you’ll want to keep for as long as possible, give them shorter contract to make it easier for you to change them when the time comes.

Youth players for the win!
Early on (and probably later on as well), youth players are amazing. Not only that your youth players will usually be better than anything you have in the starting squad, but they can also be sold eventually for huge profits.

So make sure that you always collect them as fast as possible and start playing them right away. Don’t use them as starting players though as they usually get a penalty for that. Instead, check their profile and go through the number of matches required to get rid of Rookie status by using them as subs.

You can give them the starting player experience when playing against weaker teams though and remember that the sooner you get them rid of their rookie status, the better!

Plan your Card Gathering
You can only gather cards from a single spot after each game, so a bit of planning is required here. Most cards require a shorter or longer cooldown period after gathering and some are more important than the others. So plan your card collecting based on your current needs.

Don’t forget to also rest your team! Not only that you get some NRG cards when you do so, but the energy of all players increases a bit when you have them rest.

Watch ads for extra chances
Every now and then, you are given the chance to watch an ad and get an extra retry chance in case one of the events doesn’t go as well as planned. Although you always have one retry per match, it never hurts to get that second one for extra confidence.

Remember to use it though as unused retry chances won’t carry over to following matches.

Remember that this is a long term commitment!
I’ve seen many people complain that their team promotes after the first season and then it’s so difficult to do anything. Well… remember that New Star Manager is a simulation game and usually when a team promotes, it won’t get the championship instantly.

You have to take your time to develop your stadium, get better players and get the most out of each match that you play. Eventually, you will go there, but give it time and don’t expect to build a team like Barcelona in just one season!

This would be everything that we have for you right now in terms of New Star Manager tips and tricks. If you have additional advice – or questions – don’t hesitate to let us know by commenting below!