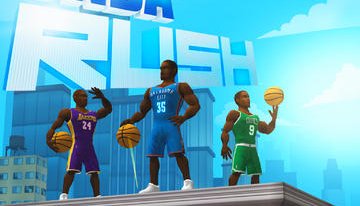 A new endless runner is starting to be a mega hit on the iTunes market: NBA Rush. The concept is pretty funny, as we have NBA stars fighting against aliens with their basketball skills, but the game itself is pretty intense and high quality. We are here to share with you today a set of NBA Rush cheats: actually, tips and tricks that will help you play the game better and get the most out of it.

So if you can’t really hit the high score or banish those aliens off Earth’s face, let’s check out below some helpful NBA Rush tips and tricks!

1. Always look at what’s coming
A good strategy for planning your route is to look ahead and see what’s coming. Not only that you will be able to take the easiest route (which you should always do), but also the one where you can collect the most coins and, most important, power-ups.

2. Master the jumping
I love jumping on shredder aliens but I hate it when this ends my run because of a poor jump. Learn and master the jumping (with and without the boots power-up) and hit those as often as possible for an extra score and a jump boost to reach platforms that might hold more money and / or diamonds or power-ups.

3. Be on the lookout for diamonds
Every now and then you will be able to collect a diamond during your run. Make sure that you’re always on the lookout for those and get that diamond no matter what. They’re more valuable than a single run in most cases.

4. Manage your players
It will probably be some time before you get to have a huge roster of players to chose from, but always make sure that you have the best three in your team. I would recommend having the one with the best stats as the first player since you will play with him the most. And always look at the ones you already have in order to equip the best.

5. Prioritize the purchase of new players
It’s a better idea to save most of your coins earned during play time to purchase new player cards and therefore unlock new ones: you might get one with better stats or you might get a similar player card, in which case you can level up your player and he will double the bonus provided.

6. Always look for the rocket power-up
That’s what I call a “Gold mine” and you should do your best to be on the lookout for that and get it whenever it appears: it gives you the chance to easily collect a ton of coins and it’s totally worth it.

7. Keep an eye on those flying bombs
Don’t know how to call them, but you certainly know what I am talking about: the bombs that keep flying until eventually crashing and trying to make your life miserable. Keep an eye on those and try to anticipate as much as possible where they will land. Try to stay in open areas as much as possible to make last second evasion measures possible.

8. What power-ups to buy
As I said earlier, I would prioritize the purchase of new player cards, but some power-ups and boosts are pretty useful. I would start with the one that increases the number of DUNK power-ups because they are required to take down the ships. Then, I would personally go for Space Jump and Game On modes.

9. Keep playing
Just like as it happens with all games, NBA Rush is also a game at which you will get better the more you play so… keep playing! Bag those coins and diamonds, get new cards and power-ups and you’ll get better and better.

These are our NBA Rush tips and tricks. Do you have other advice for fellow players? Let us know by commenting below!