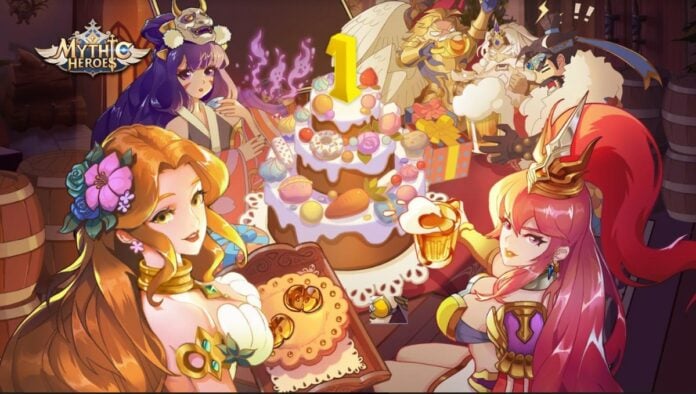 This article is sponsored by Mythic Heroes

It’s Mythic Heroes first Anniversary, and to celebrate, the game is making a range of rewards available to players, as part of the Anniversary events.

For the uninitiated, Mythic Heroes is the popular Idle RPG that sees players assemble a team of Gods and Heroes, in order to fight a war against Dark Forces. Players can enhance the abilities of their characters, acquire powerful weapons, and gain new skills in readiness for battle.

What Kind of Rewards Are On Offer?

IGG, the developers of the game, have confirmed that there will be a range of rewards available in the three weeks leading up to the first anniversary on September 6. These are listed as follows:

On the Anniversary itself, the rewards will be as follows:

Players can check in every week to claim these rewards. But wait, there’s more! In addition to these check-in rewards, Mythic Heroes is offering some anniversary specific events for players to enjoy.

In addition to earning the rewards we’ve mentioned above, Mythic Heroes has laid on some additional opportunities to gain rewards.

The first of these is the Firework Festival, making its return on September 3rd. Players can complete daily quests to acquire fireworks. Setting off those fireworks will then earn you Fortune bags, which can be spent in the event store.

And second is the Kingdom Raiders event, where you can earn Pirate Gold. Once again, this can be swapped for exclusive items at the event marketplace.

Anyone who wants to join the fun can follow Mythic Heroes on their official Discord and Facebook pages. The game is available on both Google Play and App Store, download it for free right now!