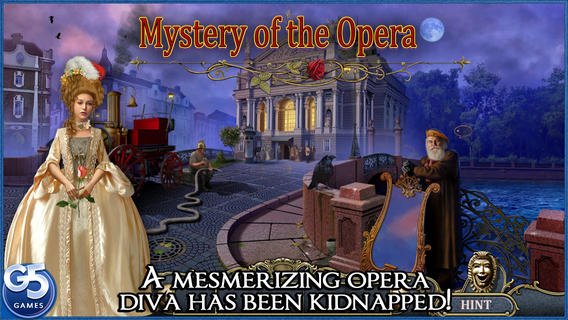 The classic novel Phantom of the Opera provides the inspiration for this latest hidden object game from G5, taking the dark tale of obsession and adding in a hint of magic to appeal to today’s audiences. The result is a fairly epic adventure that is certainly strong enough to captivate and challenge most gamers and is only really let down by a few minor points.

The setting for this version of the story is unchanged, taking place in 19th century France on the eve of an opera diva’s debut. After a spectacular show, young Christine is kidnapped by a shadowy cloaked figure, prompting her horrified fiancé to embark on a dangerous quest to return his beloved to his side. However, it is soon apparent that there is more to the kidnapping than first meets the eye, and the fiancé soon finds himself delving into the realm of magic and must make use of powerful amulets to aid him. What follows is a complex and involved journey through the maze-like back rooms of the opera house, the streets of Paris and even ghostly graveyards.

Visually, Mystery of the Opera is of the expected high standard, with a wide range of highly detailed environments that really evoke the era and create a foreboding atmosphere, full of mystery and menace. Colours are muted and brooding, while the lighting is suitably eerie, and the player quickly becomes immersed in this dark world and the mystery that unfolds before them. Things are only marred by some of the character designs and animations, which can be a little awkward and clumsy. 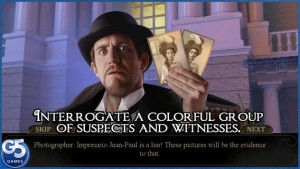 The story itself begins strongly enough, with a bold opening sequence which nicely sets up the quest. However, after this, things unfold rather leisurely, reducing the dramatic tension somewhat. Of course, this type of game is not meant to be an action-packed affair, but there is little sense of urgency to the fiancé’s actions which renders his quest less engaging that it might have been. The script too suffers from dialogue that is frequently stilted and melodramatic, lacking subtlety, while certain plot points are introduced which cause a moment’s bafflement.

However, for many gamers the story is only of secondary concern, and they are likely to forgive such shortcomings. Instead, it is the puzzles which are of greater importance, and it is here that Mystery of the Opera scores highly and which turns the game into something much more satisfying. The many conundrums on display here are nicely varied, with a near-perfect blend of hidden object sections, traditional brainteasers and object-fetching quests. Such puzzles are rarely less than logical in their solutions, with objects needing to be used in places which make perfect sense and with brainteasers capable of being solved with clear and straight-forward thinking. This is immensely gratifying after having played other games where solutions are seemingly random or just plain obscure.

The game is extremely large, with a huge range of puzzles and environments to explore and while this does obviously increase the game’s appeal and value, it does also bring a minor annoyance. Given the number of objects to discover, areas to visit and puzzles to solve, it does become tricky to keep track of where you need to go in order to use a newly discovered item. As mentioned, while item use is logical, it is very easy to forget where exactly you saw the candle that needs to be lit with your new-found matches or which locked door can be opened with that key. While you can consult a diary to keep up-to-date with your current tasks (and the story), they are only described quite vaguely, so it is likely players will find themselves traipsing back and forth on occasion. The simple addition of a map screen would help alleviate this, and it is surprising this option is not seen more frequently.

This is a generally fine example of a hidden object adventure, which will appeal to romantics and casual gamers in search of a lengthy and testing adventure. While the storyline is a tad lacking and less than compelling, Mystery of the Opera benefits from solid puzzle design, requiring players to think logically without resorting to random guesses or stabbing wildly at the screen. This is by far the game’s strongest feature and this approach should be applauded.