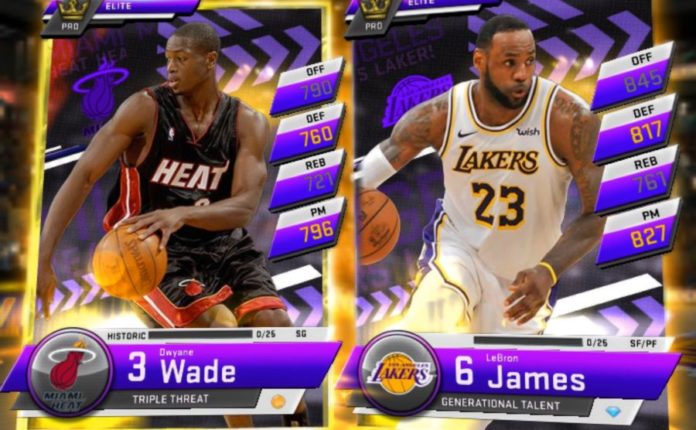 This year, we’re treated to a brand new My NBA 2K20 mobile game sooner than usually and we have absolutely no reasons to complain about this! More fun, updated roosters and a fresh challenge to build a perfect team: how can you not like this?

And we’re here to help you do it faster than the others by sharing a complete My NBA 2K20 guide: tips and cheats that will help you get more cards, win your games and have more fun.

So let’s not waste a single second and instead let’s check out below our My NBA 2K20 tips and tricks!

The daily missions in My NBA 2K20 started to become a bit more rewarding and useful than they were in the past, so now focusing on them really helps you progress a lot faster. So make sure that you check them out daily.

Also, it’s a good idea to try and log in daily in order to grab those daily log in rewards: even if you don’t have time to play, at least log in to keep the rewards coming: there are some nice ones to be had!

2. Constantly change your line-up and decks (especially early on)

You need to always keep an eye on your starting line-up and card decks for all the other game modes available in My NBA 2K20: being smart about choosing the right cards will give you the biggest chances of winning all games.

I am not saying here that you should always use the strongest cards you have! On the contrary, you have to masterfully manage the power of your deck in order to give you an advantage no matter what game mode you play.

Early on, you won’t be able to do this simply because you won’t have enough cards to juggle with… but later on, things will become easier and this tip I will share below will make you invincible!

As you probably know already, your line-up or deck has a “power rating” that’s shown on the deck’s screen: there’s a progress bar that takes you to the next level once you fill it up by increasing the strength of your deck.

Your goal is to always have the progress bar filled up to 99% (or as close to that as possible). This way, you will be the strongest in that power range and easily beat opponents.

Even though you do get better rewards from the picks if you’re on a rarer ladder, it’s still more useful to actually get more picks constantly instead and build up your team. So pay attention to this detail and you will be invincible!

3. Make sure that your players are in their favorite position

This only takes a few seconds, but can help you tremendously in each game you play. Having your players play in their preferred position gives them a bonus, makes them stronger and increases your chances of winning.

Rarer cards are automatically better, but in most situations, placing a rarer card into a non-preferred position is still worse than placing a more common one in its preferred spot on the court.

So take some time to check what your best cards are and make sure to arrange them in such a way that they’re always playing their favorite position (or any of the two if they have multiple positions they can play in).

Pro players are really difficult to create, but completely worth it as they take any current player to an ultimate level.

In order to create such an amazing player, you will need two identical cards brought at the maximum level. You merge these two cards into one, creating a brand new player with a boost in its base stats.

This is definitely time consuming and extremely expensive, but it’s the only way to get the upper hand once you have some play time under your belt and an already solid deck built.

Even if you don’t have the Pro status in mind, you should still train your cards constantly in order to boost their stats and make it easier for you to win.

Early on in the game, though, you shouldn’t focus too much on training your players and instead you should just focus on hoarding cards: you can hold a maximum of 200 at any given time, and I would recommend to constantly wait to reach the limit before going on an upgrade spree.

I always use the same strategy when it comes to managing upgrades:

When I first start playing, I wait until I get 75 cards under my belt before starting to upgrade my best. Once I reach 75, I use 10 cards to level up my top 5 players. This leves me with a deck of 25 cards, which is the amount needed for 2 on 2 and the maximum required by any game mode.

After this, you will have your main cards at level 4, which is decent… and a lot of work ahead.

Start playing the lengthier game modes and get more card picks. Wait until you have 100 cards, and go on an upgrade spree again (don’t forget to do it only after you edit your decks to make sure that you have the best cards selected in all game modes!)

Then do your third upgrade spree at 150 cards – this will take some time, but it becomes easier and easier as you have better cards to play with and more options.

Always start working on your top 5 cards (in terms of rarity first): this way, as you play and get more cards, rarer cards will take the place of the ones you have already upgraded to level 4, they will get to a decent level too and at the same time help you build a solid deck for the other game modes. Works like a charm!

If you have played My NBA 2K20 last year, you probably know everything about the game modes available in the game, as nothing has changed. But I will still cover each of the game modes below and maybe help you get the upper hand each time you play!

Quick Game: This is the basic game mode and fastest to play. Your best 5 face off against another team. You select the players that go in each quarter, depending on some specific stats.

The recommended strategy here is to always use your best player first (or best two players) and the worst second – the AI seems to play their best either first or second. And if you followed my strategy with the player’s rarity, you will always end up victorious in at least one of these two encounters, making it easier to win the following two and therefore the game.

2 on 2: This is probably the most difficult to master and the most time consuming game mode to build a deck for as it requires a whooping 25 cards. But it’s really fun and my overall favorite.

Here, you team up with another player (from your own Team or a stranger) and play against two other human players for a total of 16 battles in which you cooperate with your teammate: you select one card to use from your deck and they select one from theirs.

In order to get the most out of this game mode and ensure constant wins, you should try to communicate with your teammate during the quarter breaks, strategize and plan your moves.

Remember to always edit your deck and have the players match their preferred positions, and also keep an eye out for players with a diamond icon, as they get a Power Combo bonus – which translates in even better stats.

Reigning Threes: Also extremely fun and less time consuming than 2 on 2, Reigning Threes is an all time fan favorite game mode in the My NBA 2K mobile franchise.

Here, you’re all by yourself to try and win against another human opponent. You have to strategize a bit and use your cards smartly in order to get the win (and also used my trick recommended at #2).

My recommended strategy here is to get your absolute best player in the group stage and keep your other 3 top players for the finals. Then mix and match the others in order to guarantee that you actually make it to the finals with the meter filled as much as possible.

Why keep your absolute best for the stages? Because most players will get their best in the finals – but you keeping yours in the stages guarantees more wins, which means a better filled meter for your players, which means increased chances of winning.

Sure, doing this you will most likely get a guaranteed loss in one of the three finals battles, but you will also most likely win the other two easily simply because you have the overall better players there. Try this strategy, it works!

Champions: Probably the most complex game mode available in My NBA 2K, this one requires dedication and you being active for the entire duration in order to have a better chance at winning.

There are many boosts and bonuses that you can and should always unlock before starting the Champions season: complete the task to unlock both Coach Bonuses and then make sure to constantly use your existing challenges in order to get massive bonuses for your entire line-up.

Remember that these challenges reset after each game, so doing them over and over and micromanaging them is key to victory. A very complex mode indeed, but extremely rewarding as well!

Probably the developers of the game realized that everybody taps on the cards when getting new picks in a specific order, creating patterns of their own (at least I do!).

As a result, they introduced the “hidden Pattern” mechanic in the game. There is no info right now on what the pattern is and I am not entirely sure I have missed it by tapping a button without reading (and I can’t see it again), or if you have to completely guess it.

If it’s the latter, it’s almost impossible to get it, but if it’s the former – just keep an eye on the pattern and make sure to follow it flawlessly in order to increase your reward. Hint: take a screenshot of your screen if it’s shown to you, to make sure you don’t get anything wrong.

8. Join a solid team and enjoy the benefits

Finally, we have the social aspect of the game: Teams. These are the “clans” or “alliances” or whatever they are called in other games.

When part of a team, not only that you can chat with fellow teammates and invite them to 2on2 matches, but you can also send and receive gifts and, even more importantly, take advantage of some team perks that improve your game.

So being part of an active team is very useful, as additional bonuses are always welcome.

This would be all that we have for you right now in terms of My NBA 2K20 tips and tricks. If you want to make some additions to our guide, feel free to share your thoughts in the comment section below!