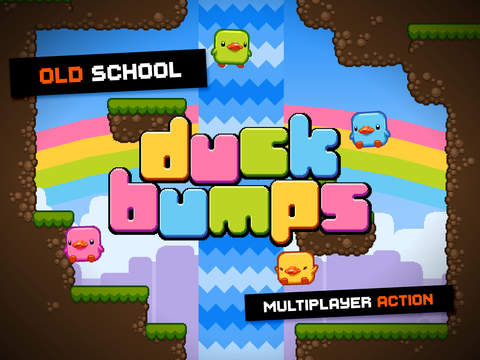 A new multiplayer focused arcade game is now available for purchase on the App Store, a game which takes some of the features of the smash hit Flappy Bird to create an all new experience.

Duck Bumps has been developed by Antti Ojala and features a gameplay experience that’s easy to understand. Each player will control one of the four ducks with two buttons placed in the cornet of the screen which are used to fly around with physics not too different from the already mentioned Flappy Bird. In order to win a match, players will have to bump into the other players. Once a duck is bumped, it will turn into colored pieces that will make the life of the other players way harder, a gameplay feature that, while simple, actually adds some tension during a match, especially at the end.

Duck Bumps is a game featuring a simple but fun gameplay experience that more than a few gamers will surely enjoy. The game isn’t as complex as other multiplayer focused iOS games, that’s true, but when a game is actually fun, it doesn’t really matter. Duck Bumps is now available on the App Store for $1.99