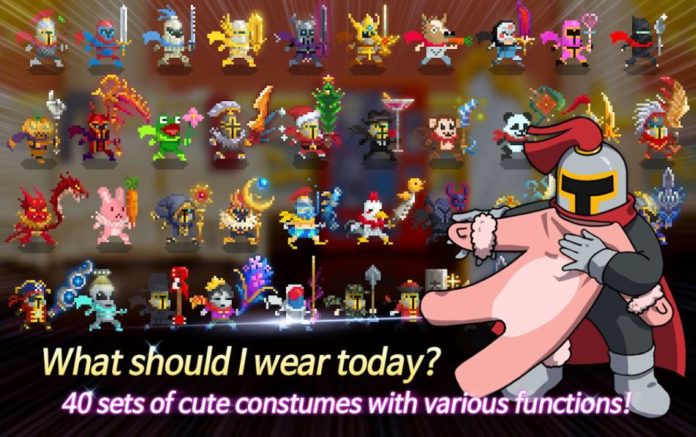 The Mr.Kim, The Mid-Aged Knight tips and cheats we will share with you in today’s article are going to make you love this game even more than you probably are, because they will show you exactly what and how to upgrade in order to be more powerful and pass levels much, much easier!

So if you are a fan of idle games as much as we are, then let us walk you through out best Mr.Kim, The Mid-Aged Knight tips and tricks that we have discovered!

Do the right upgrades

When you are just getting started in the game, you won’t have much to choose from, but worry not, because after you have done a couple of upgrades, you will be good to start killing fast and pass through the stages in a flash.

There are several things you can work on upgrading, each of them making you more powerful in the long run: 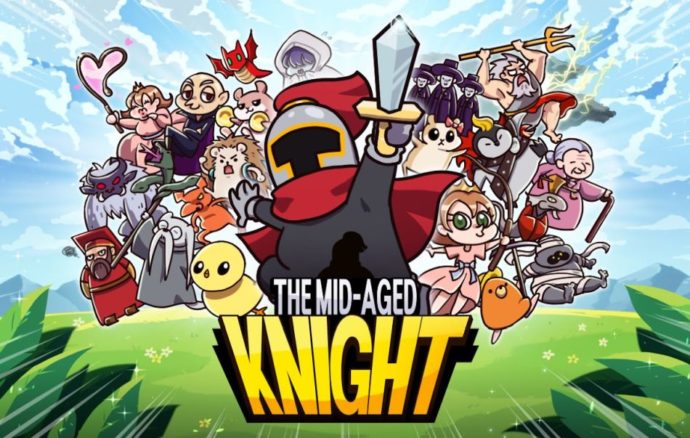 – Quests: This is what I suggest you upgrade first and foremost. This will give out constantly Gold, so even if the first few dozen stages will go sloooooow as a snail, you will still have a good gold income.

I suggest that you upgrade Catch Mice up to around 80 – 100, then all the quests by a couple of points up to Suppress Red Bandits or Hunt Beasts, depends how much you’re willing to wait.

After you did some upgrades on these quests, which by the way, can be done with much more ease if you have the right item (more details about this below) you can move on to the next part of the upgrades.

– Weapons: This part of the upgrades will go fast up to a certain point, when the cost of the weapons will be too much to just make all the upgrades instantly.

The weapons are basically what lets you kill monsters quickly and gather the gold constantly. I didn’t opt for the upgrade on weapons first because I consider the quests which give that passive income much better for start. 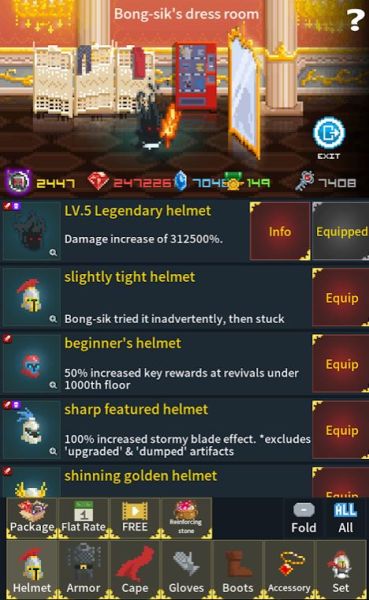 After you’ve upgraded fully a couple of weapons, you will notice a big difference: you kill all the monsters and bosses in one shot. This is kind of a power spike, which allows you to progress a lot in the game.

Don’t forget to make weapon upgrades constantly in order to pass levels quicker in the game. Also, try to unlock the 76th weapon (Dragon Staff) in order to be able to open the Mine.

– Pets: Pets are an important feature in the game, as they will help you fight the enemies, providing powerful attacks and debuffs on the enemy. They are available as follows:

Grrr: little adorable chicken pet which you get after defeating the level 100 boss.

Ham: another cute and adorable critter, a hamster! This one is also available after defeating a boss, but at level 300.

Chilli Sauce: is a baby dragon which will join you after passing the last floor of level 600.

Little Princess: is a simple girl named “Princess” (not an actual princess) and she will join after passing the last floor of level 900.

Pudding: this cute little one is Ham’s first love, and she will join you after defeating the level 1100 boss. 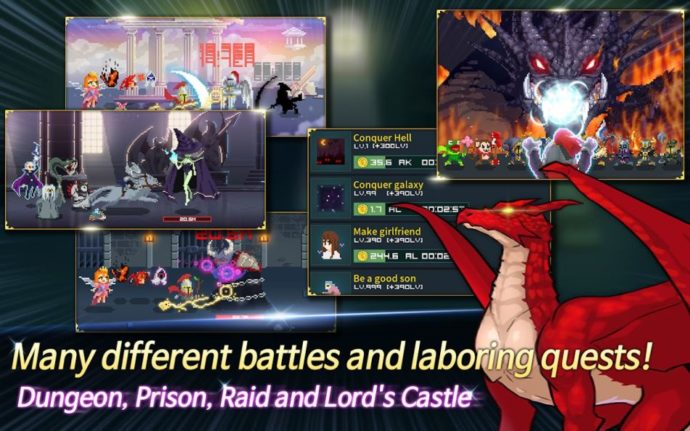 Annabelle: if you’ve seen the movie, then you should know this isn’t as terrifying. Even if she is a ghost, she wants to join you after passing the 4500th floor.

MMOB (Mining My Own Business): is a… thing… which will join you after you open the Mine.

Charming: this is the last critter which will join the party after you pass the last floor of level 6500.

– Artifacts: These are some items which will help you pass the floors faster, get better rewards and generally anything useful in the game. You can upgrade the Artifacts in 3 ways: by Keys (both types) or by actual money. So if you really want to level up fast, you have several options.

– Relics: Just like the Artifacts, the Relics are other powerful items which you can upgrade after passing high floors. They are slightly stronger. 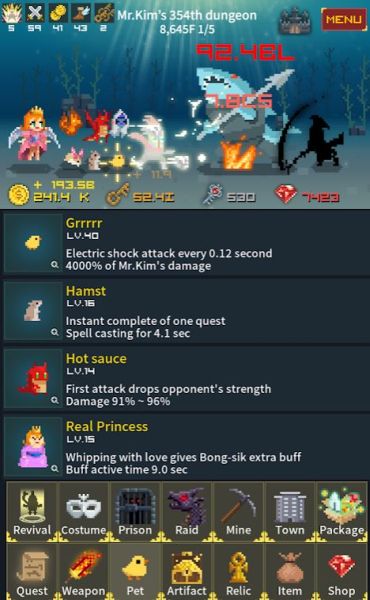 Get the “must-buy” item!

In my opinion there is one item which is definitely work the diamonds. That item is the “FULL POWER MR. KIM” and it will boost your weapon level until you revive. It costs 20 diamonds, but it is really worth it for some levels.

Even just one level is pretty good, because let’s say instead of a level 1 weapon, you will have 2 and so on, every time that you get a new one. I have upgraded this one to level 3, so it gives +3 levels for me. It’s really a good deal in my opinion.

The costumes are not purely aesthetic items in the game, as they will give you powerful stats which you might not even expect. Check them out and make sure you buy a few when you have collected enough currency.

You should purchase as many costumes as you can, and as often as possible. They will give you some extra stats that will help you throughout the game, so make sure you purchase them.

The costumes are some of the most OP things in this game. Do you want to level up quests by 5 times with the same amount of gold? Do you want to receive more keys when killing chests in the dungeon? Then purchase the costumes that give those boosts and add them to your collection.

Seriously, there is a ton of useful and powerful stats that you can gain from them. Just take a look at each of them and carefully read their description. Also, you don’t even need to have the costume equipped – once purchased, the bonus stats from it will stack up! 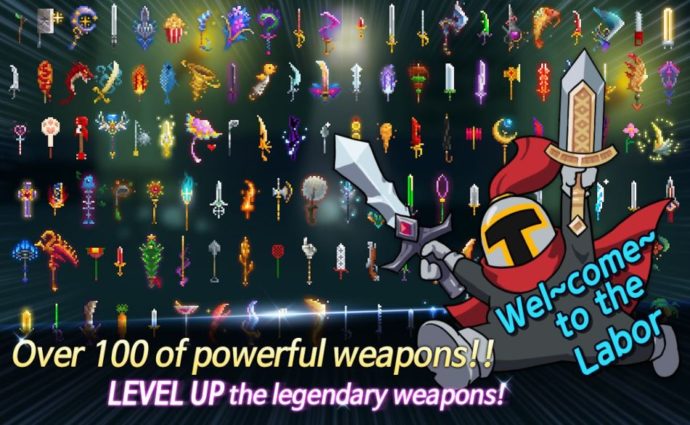 Get more diamonds and gold for free

You can get every day 20 Diamonds guaranteed, for free by watching an ad. This option is available in the Costume section and if you look down below in the “Free” tab on top of “Cape”. This option will reset every day, so make sure you come every day and spend 2 minutes watching ads because it’s worth it for the 20 diamonds!

Another way to get diamonds free is by going in the “Item” section and selecting from the top part of the screen the “Gems” tab. This will reward you with 5 diamonds for every advertisement you watch, and will reset every few minutes. 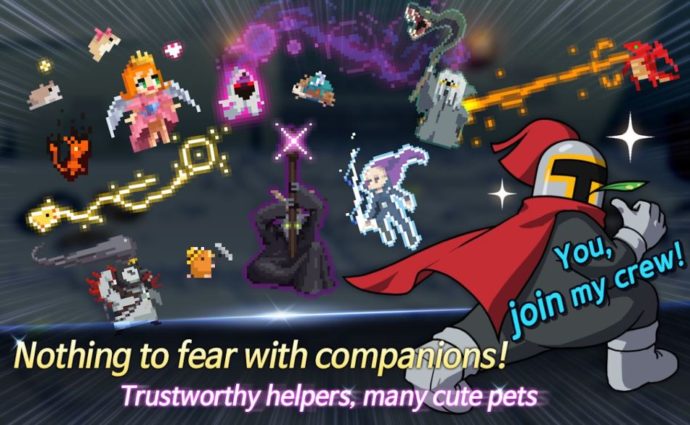 For free mining stones you will have an option which will reset every few hours, and you should definitely watch an ad for that! They are going to be super useful later on, you’ll see!

This option works well for free gold and buffs also, so if you are in need for a couple of gold to make some last minute upgrades, go ahead and watch an ad for them! It’s worth spending 30 seconds in exchange for that juicy gold!

Upgrade quests to maximum before logging off

This is my ultimate tip for you. The quests will carry on even when you are offline, so in my opinion you should always max them out before you go offline (or sleep or simply closing the game).

The gold you will get back from upgrading the quests will be a ton, so the next time you log in the game you will be able to make a lot of upgrades with the money earned offline. It’s a really great way!

These would be all of our Mr.Kim, The Mid-Aged Knight tips and tricks! If you know some other cool tips about this awesome and fun idle game, leave them down in the comments below for all of us to learn!