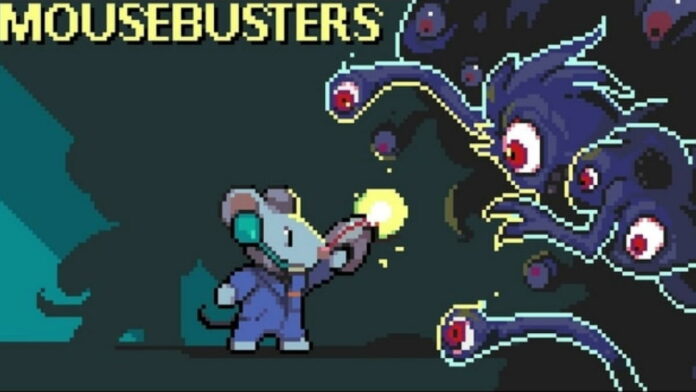 A young man has recently moved to the a new country. As he is unpacking and setting everything up, he wakes up one morning to find out he has been turned into a mouse! Now, he quickly finds himself in the middle of a supernatural haunting in Mousebusters, a pixel art point and click adventure.

In Touch Tap Play’s Mousebusters tips and tricks guide, we will walk you through the first half of the game, capturing all of the ghosts along the way. Let us get started with our Mousebusters walkthrough guide to capture all ghosts!

This apartment room serves as a short tutorial for the game. The tenant is a young lady in her 20’s who loves fashion and all things trendy.

Enter room 101 and you will be presented with a bunch of exclamation marks – these show spots you can interact with or examine. Examine them all and you will earn some mouse coins, which you can spend back at base.

Eventually the woman will try to open her curtains which will reveal the ghost. Since this is the intro ghost, you will not have to do anything crazy, so just tap on the ghost to capture it!

(This Mousebusters guide was first published on Touch Tap Play)

The tenant is not home, so the room is really dark. Examine all the points of interest around to room to find out that the tenant is a young man who works in some kind of technology sector.

The tenant will eventually come home, and he will turn on his computer to continue working at which point the ghost will reveal itself. Try to get to the computer, but the tenant will be blocking the way.

Eventually the man will go to sleep. Examine the calendar and the sleeping man to get two clues as to what his password be, then boot the computer and try to logon. Try both clues, then the ghost will show itself – now is your chance!

A normal, young man in his 20’s that is from out of the country. He is having trouble adjusting to his new life, but it might be because of the ghost.

This time, the ghost will show itself right away, attached to the family picture on the man’s desk. Examine all the points of interest to get a mouse coin, and the man will cook himself some cup noodles. Make sure to examine the trash can next to the kitchen counter to find a hidden mouse coin!

As he is enjoying the noodles, you will hear noises coming from next door. The man likes listening to the neighbor practicing guitar, and eventually he will get up to put the empty cup on the counter.

Hop on the counter and knock over the cup, then knock over the kettle. The man will have to clean the spilt water, giving you an opening to capture the ghost!

This room belongs to a elderly lady. A tiny ghost will immediately appear on the bed, so go ahead and capture that. That was too easy, right? There must be something else in this room…

And just like that, a new ghost will appear from the bookshelf, but before you can deal with it, the old lady’s cat will attack you! Examine the food bowl near the top left door and the litter box at the bottom right corner for secret mouse coins.

To deal with the cat you must examine the shelf and use all three toys on the cat. After that it will get tired and take a nap, leaving the ghost open to attack.

This is it, the final room! This room belongs to a young man who is interested in guitar. He has been practicing it very often, but there seems to be something else on his mind.

His prized guitar will sprout a nasty looking ghost, but he will not let you get close to it. Examine the game console on the table and the stack of CDs at the bottom left corner for secret mouse coins.

The man will start watching TV. Try to capture the ghost, and he will find you again. You will need to be patient and wait it out. He will eventually try to sleep, making it look like the coast is clear… but he will once again block you.

Grab the guitar tuner off the shelf and bring it to the bookshelf. He will tune his guitar and start playing it, getting totally lost in the act. As he is zoning out, move in for the capture!

The entire complex has been cleared of ghosts, but Boss has one final task for you. He will give you a stack of invitations for a BBQ party, so you have to go around to each apartment door. You simply have to tap on each door to deliver the invitation.

The apartment tenants get together for a nice celebration of their new found happiness. Enjoy the ending and watch the credits roll…

Suddenly, each tenant gets swallowed up by an unknown ghost! Turns out your duties are not quite over yet. Head into the basement after boss and he will show you the portal to the ghost’s world.

And this is where the first episode comes to an end. Congratulations, you have finished the first part of Mousebusters!