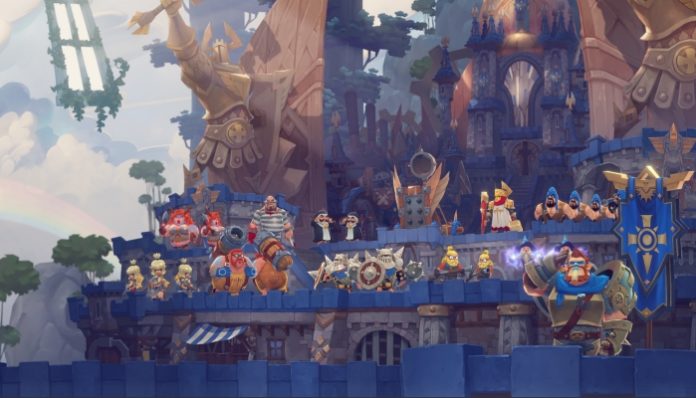 Watch a miniature war come to life right before your very eyes in Minimax Tinyverse, a new PvP real-time strategy game! Your troops and champions will march into battle for you, and YOU get to directly affect the battle! Pick up your heroes, sprinkle magic dust to empower them, and lead the way with the help of our Minimax Tinyverse cheats and tips!

Minimax Tinyverse features a lot of intricacies and mechanics that you really need to know about, since the game also does away with a lot of elements commonly found in PvP strategy games. So, let’s jump right in with our Minimax Tinyverse cheats, tips and tricks strategy guide!

Use both lanes to confuse your opponent!

On the Tinyverse board, there are two main lanes for your troops to traverse. The main lane is the one that twists and turns down the middle, and is the center stage of the action. This lane is the longest and takes some time to get across.

The second lane is the riverbank. Compared to the main lane, the riverbank is much faster as it is a straight shot down to your opponent’s base.

There are a few things to consider here. Sending troops down the river seems like a faster route, but keep in mind that the water will slow down most troops, unless they have the Combat Swimming skill. Still though, it is a good idea to launch troops down both lanes, that way your opponent will have to choose between defending the two lanes.

Know your attack and armor types!

Every single champion and troop has an attack and armor type. For attack types, there is piercing, slashing, bludgeon, magic, special, and siege.

For armor types, there is unarmored, light, medium, heavy, special, and tower. For quick reference, here is a chart detailing every single possible matchup.

Notice how almost every attack and armor types have an advantage and weakness? Knowing which troops have what and knowing which types to respond with is they key to battle! For this reason, it is important to have a balanced set of troops so that you can cover all of the types.

Strategic use of your miracles can help turn the tide of battle in your favor! Do not forget about them – miracles are fueled by mana, which is a separate resource from your rations, so do not worry about having to choose between the two.

You have two base miracles that are always equipped no matter what: Miracle Ramp and Rainbow Fence. You learned about these in the tutorial, and they are extremely helpful, so do not neglect them!

The other miracles however can be switched around as you please. You can learn new miracles as you level up. You can drop meteors on your enemies, heal your allies, shield them from danger, and so forth. There are a lot of helpful miracles!

Pay attention to the time!

Watch the clock at the top of the screen during battle – it will tell you the current time. Remember that the Aillai grow stronger during the day, while the Creaea during the night.

If you are having trouble pushing into your opponent’s base, you may want to wait until the time of day is in your favor. Conversely, your opponent may try to make a big move during their time so be prepared to defend.

You may have noticed that champions have the “special” attack and armor type. Champions do 75% less damage to towers, but they take 50% less damage from siege, which is the attack type of towers. This makes champions perfect for pushing – let them get in front of your troops to grab the tower’s attention, then take down the tower!

Both factions have their own currency!

If you ever feel like you need a change of pace, you can switch factions and try them out. Do not worry about wasting the blue/red currency, as this is exclusive to Aillai and Creaea respectively.

Both factions have their own set of unique champions and troops, so feel free to try them out. You will also gain knowledge of your would-be opponent’s troops as well!

That’s all for Minimax Tinyverse! If you have any other tips or tricks to share, let us know in the comments below!