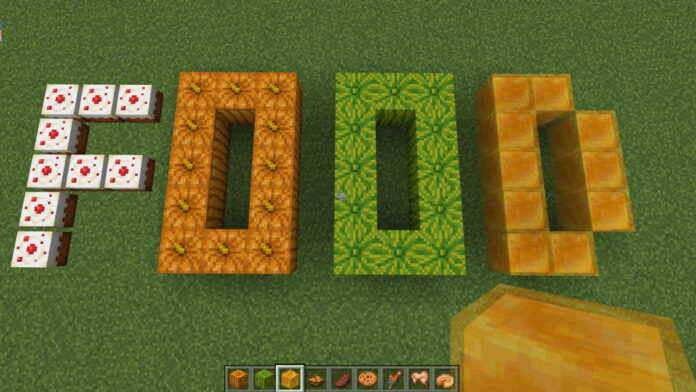 The world of Minecraft is equal parts inviting and dangerous, and one of the first things you’ll need to do in Survival mode is secure a source of food. There are lots of delicious things to try in Minecraft, each with their own effectiveness at filling up your belly. Today, we’ll show you the best foods to eat in our Minecraft: Bedrock Edition food tier list!

Suspicious Stew, although somewhat complex to craft, is easily the best food in the game… if you use the right ingredients. Crafting Suspicious Stew with either a Dandelion or Blue Orchid will grant it the Saturation buff, restoring a whopping 13 food points and 21 saturation. After you eat one of these things, you won’t have to eat for a while!

Cooked Porkchop/Beef is the preferred food of choice for many players, as they restore 8 food points and 12 saturation, and a single stack of them goes up to 64! There’s nothing wrong with sticking to good old-fashioned meat, as they’re the easiest to make and transport, provided you have an animal farm going.

Related | How to Use a Minecraft Bedrock Map Viewer

Bread/Baked Potatoes are the tried and true food that most players start out with, since it’s easy to get a Wheat or Potato farm up and running quickly. Both foods restore 6 food points and 11 saturation, making them excellent starting food.

Rabbit Stew is another complex recipe, but it restores 10 food points and 12 saturation. It’s hard to make at first because Rabbits are rare, but once you breed your own Rabbits, it’s a lot easier to make the stew. Though, since you have to use Mushrooms in the recipe, you might be better off just making the Suspicious Stew.

Pumpkin Pies are a simple and decently filling sweet treat, requiring only pumpkin, egg, and sugar. They restore 8 food points but only 5 saturation, a common trend with sweet foods. They stack up to 64 though, so they have the portability advantage.

Cooked Mutton/Salmon/Chicken are the slightly worse versions of Cooked Porkchops and Beef. They restore 6 food points and 7-9 saturation, and they stack, making them convenient and easily farmable. If you don’t have a Pig or Cow farm, these are a good alternative.

Cakes are yummy and fun to craft, though they’re a bit cumbersome, as you need to place them down and eat each piece individually. A whole Cake restores 14 food points, but a measly 2 saturation, so you’ll get hungry again fast.

Beetroot Soup is an easy and hearty meal choice, clocking in at 6 food points and 7 saturation. It’s not the best, but since Beetroots are easy to farm, it’s still a good choice. Just like the other soups, they don’t stack though, making them a bit cumbersome.

Mushroom Stew isn’t bad on its own, restoring 6 food points and 7 saturation. Though, if you’re going to be using both types of Mushrooms, you may as well opt for the much more filling Rabbit or Suspicious Stew, if you’ve got the right flowers.

Golden Apples are extremely helpful for fighting bosses and tough enemies. They only restore 4 food points and 9 saturation, making them not so great for hunger, but they do grant Regeneration and Absorption, which can give you the edge in battle. The rare Enchanted Golden Apple variant, which can only be found in dungeons, is even better!

Carrots are a great source of food early on, and they’re low maintenance. Though they only restore 3 food points and 3 saturation, they’re easy to grow, and they stack up to 64. However, if you’re planning on growing Wheat or Potatoes and you don’t plan on making Golden Carrots, you’re better off just sticking to those two crops.

Golden Carrots restore 6 food points and 14 saturation. Your Gold is probably better off used for something else, and Carrots are fine on their own. Despite this, they’re a great choice if you have a surplus of Gold or if you don’t care for any of the Golden tools.

Rotten Flesh can be eaten in an emergency, restoring 4 food points but negligible saturation. Unfortunately, Rotten Flesh has a chance to inflict Hunger, which will make you even hungrier! It can be cured by drinking a bucket of Milk, but who has time for that?

Raw Meats/Fish can be eaten for 3 food points and 2 saturation in a pinch, but they should always be cooked first, as they restore a lot more. Raw Chicken should not be eaten however, as it has a chance to inflict Hunger.

Honey Bottles can be drunk to restore 6 food points but only 1 saturation. They take longer to consume than other foods, with it being Honey and all, so they’re not really recommended for food. Honey does cure Poison though, just like Milk.

Cookies are a nice treat, but they only restore 2 food points and essentially no saturation. While they’re fun to craft, the Wheat is better used for regular Bread.

Melons restore 2 food points and 1 saturation, making them not great for hunger. You should use them to craft Glistening Melon Slices instead, so you can brew Healing Potions.

Dried Kelp is an option if you start near water, but since they only restore 1 food point and practically no saturation, you’re much better off just starting a Wheat farm to get some Bread.

Sweet Berries are an excellent food source early on if you happen to spawn near some. The bushes are easy to farm, and berries restore 2 food points and 1 saturation. You should move onto better foods once you’re able to, though.

Beetroots restore only 1 food point and saturation, so they should never be eaten on their own. Combine six of them with a bowl to make Beetroot Soup instead.

Apples restore 4 food points and 2 saturation, and they’re low on the tier list mainly because of how hard they are to obtain. They are randomly dropped from leaf blocks, meaning there’s no way to reliably farm them.

Tropical Fish are obtained when killing any kind of ocean fish mob. They only restore 1 food point and no saturation, so they’re not really worth eating. You can feed them to Wolves, however, so they’re not entirely useless.

Poisonous Potatoes/Spider Eyes should never be eaten, as they will almost always poison you! Poison Potatoes can be thrown in a Composter, and Spider Eyes can be used for potion brewing.

And that wraps up our Minecraft: Bedrock Edition food tier list! What do you think? Should certain foods be moved around? Let us know your opinion in the comments below!