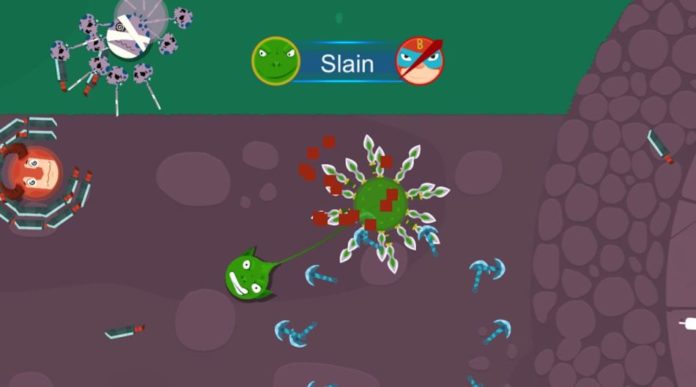 In today’s article we are going to share with you all of the Meteor Hammer IO tips and cheats to help you become the best and learn how to take on any enemy you might face.

Since in this game you are basically facing normal players from all around the world, there might be some that are extremely experienced and will be able to destroy you as soon as you get into the game – but if you follow our guide here below, I’ll tell you exactly how to deal with them, so that you won’t have to worry about getting killed, and instead win every single fight!

So, are you ready to learn all of the Meteor Hammer IO tips and tricks? Then let’s not waste another second and dive right into them!

Basically this game is extremely simple – all you have to do is take down your opponents (who are also real players from all around the world). In this game you are driving a ball full of blades which can smash the enemies.

Your objective is to be the last one standing and smash all of the enemies that appear in that stage.

In order to do this, you will have to collect all of the blades which you see on the ground to grow in size and power. You can do so by walking over them, and the game will automatically pick them up for you and increase your blades’ size and power.

You can move the character by using the left side of the screen, and if you want to launch an attack you can do so by tapping and dragging on the right side of the screen. Make sure you attack the enemy players whenever you see them, but also be careful to dodge the incoming attacks.

You will have to be very careful around the stronger players, because they might take you down in a single blow without even noticing them!

Watch an ad to triple your income

After you just finished a battle, you can choose to watch a short ad in order to claim 3 times the amount of coins! This is super useful if you want to unlock more characters or make upgrades as fast as possible, because any amount of coins will come in handy for this!

I suggest doing this when you can claim more than 200 Coins, but if you want to do it with lower amounts it’s OK too, since all of the gold will go into making upgrades, which result in your character becoming stronger.

You can also use this gold to unlock more characters, but I’ll detail more about this feature below!

The upgrades you can make are basically two types of upgrades: Speed and Strength. The Speed upgrade will increase your character’s speed on the field, while the Strength will boost the damage you deal with the attacks.

I suggest that you start off by adding as many points in Speed as you can, because that will make you move around much faster, which will let you pick up the items off the ground much faster than other players.

Either way, all of the upgrades will be super useful, so make sure that you do them because you will see huge improvements, especially later on when you will be facing newer, less experienced players.

You can find the maps on the left side of the screen, by tapping on the “MAP” tab. This will not change the game in any way, so you should first focus on making the upgrades before anything else, since that is the most important feature.

You can level up by playing in the stages and surviving for as long as you can – the more you survive and collect items off the ground, the more EXP you will get, which will result in you leveling up faster!

Watch a short ad to get free Gold

There is this super quick option which can help you gather a ton of gold, even from level 1. While you are in the main interface, you can tap on the golden button in the left side of the screen to start watching an ad and claim free Gold.

This can be done several times a day, and if you really want Gold to make upgrades and don’t mind watching ads, then this is a great feature to get stronger super fast. I think it is really super worth it, because an ad will take maximum 30 seconds, so it’s a quick way to get coins.

Of course, what else could be more fun than having the best looking character attacking the others? Well, you can unlock more characters by saving up coins and buying them. You can buy them one by one, so even if you want to unlock the last character, you can’t until you unlocked the previous hero.

The heroes are fun, but what you should focus on in the first place is the upgrades, so make sure you first invest in making these upgrades, and only afterwards on unlocking more characters.

These would be all of our Meteor Hammer IO tips and tricks that we have for you right now! Do you know some other useful game tips that you would like to share with us? Leave them down in the comments section below!