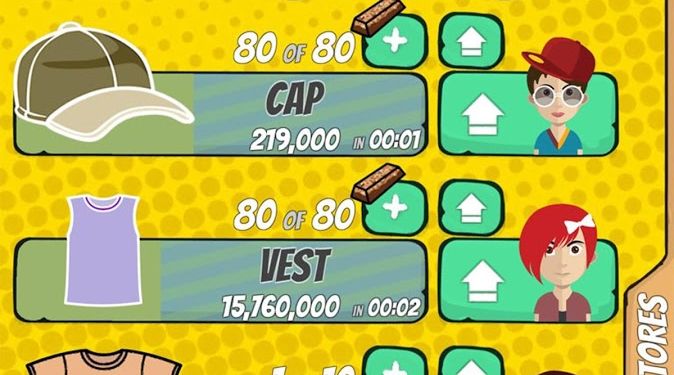 If you’re looking for a guide to Merch Mania, Don’t Blink’s idle game, you’re at the right place! In today’s article, we’re going to share some Merch Mania cheats and tips in a complete strategy guide that will help you get the most out of this game and do it as fast as possible.

Unlike regular idle games where progress is relatively fast and constant, in Merch Mania you will hit a wall really fast and you’ll either have to pay premium currency to start moving faster or wait a little bit more. If you choose the free to play method, we have some tips and tricks for you below to help you reduce waiting times by as much as possible.

So let’s not waste any time and let’s check out some Merch Mania cheats and tips below!

Activate Geniuses
The first thing that you should focus on when unlocking a new product in each store is to get enough money to activate the Genius associated to it. This way, you won’t have to tap to start production and you will make more money in the long run.

Of course, you will still be able to level up each category a lot of times and activate things on your own before you will afford to unlock the geniuses, but once you have even the first one activated, things will be a lot easier and you’ll make a lot of money when you are offline.

Don’t level up over lvl 80
You can level up your products all the way up to level 80 for regular coins. Afterwards, you need to spend Gold Ingots (the premium currency of Merch Mania) in order to upgrade even further. 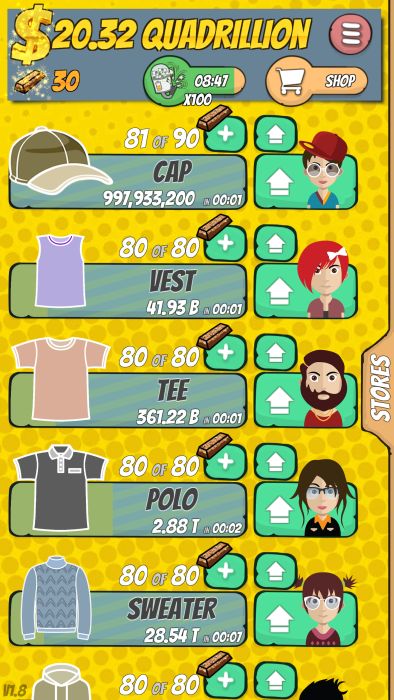 Unless you really have a ton of premium currency available, I would advise against doing this. Keep everything at level 80 and optimize earnings by upgrading other products or increasing the bonuses and boosts. Keep the Premium Currency for important stuff!

Genius Upgrades vs Production Revenue
Once you reach level 80 (but also available before getting there), you have two types of extra upgrades to purchase and increase your earnings even more. We’re going to talk about each of them below and include a recommendation on which one to focus on.

Genius Upgrades: these upgrades are available only after you have unlocked the genius associated to a product. There are two upgrades here that you can purchase: one that decreases the production time and one that increases the profits. The latter is more advantageous per money spent, so I always start with it. However, I do try to keep them both at the same level.

For example, I always upgrade up to level 5 the Genius profit increase and then do the same to the speed reduction. Then I work in 5-level batches and constantly upgrade them in this order. It seems that this is a bit more useful than the Production Revenue upgrade we’re going to talk below.

Production Revenue: I focus on this after getting the Genius Upgrades to a new 5-level incremental. It seems that you get more profits this way. However, in some cases, you might not have enough money to buy a Genius Upgrade, which become insanely expensive for the final products.

In this case, buy the Production boosts first. In the end, the idea is to maximize revenue as much as possible, so always take the option that you have available. If you can choose, start with the Genius Upgrades!

Use Boosts
Boost can be purchased with premium currency in the game, but many are received for free for completing various achievements in the game. 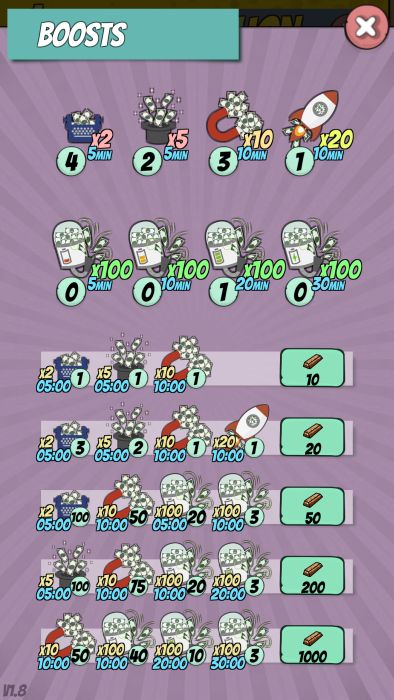 Don’t be shy about using them, but use them when they matter the most: when you have some products already unlocked and upgraded. This way, you will make a lot more money faster and it will be easier for you to unlock even more products and progress faster through the game.

Research constantly
Research pays and important role in Merch Mania because it not only helps you reduce production times and increase profits, but also unlocks new features like new Stores and new products.

Research becomes extremely expensive soon and there are huge waiting times involved so if you have enough premium currency for the later upgrades, it would be a good idea to use on unlocking them without waiting. If not… just get the money required for a new research and start working on it!

Double your offline earnings
Your stores generate profits even when you are offline and the best news is that you can watch a video ad when you return in order to double the money. That’s extremely useful to do, especially after a night’s sleep when you will have maximum profits to double the amount for.

Re-Branding & Other stores
Just like other idle games, this one has the option to restart from scratch, but with added benefits. This is called re-branding and it’s a feature that you will unlock when you have enough fans for your shop. They are generated over time, and I think that the numbers that you get are related to the income generated by your business per second.

Unlike most games, though, rebranding takes a lot of time and we had to play for several days before being able to rebrand for the first time. It is worth it for sure as it makes everything a lot easier, especially when it comes to opening new stores and getting new products, but we would’ve done a lot better if we knew these tips and tricks before starting.

So these would be, right now, our Merch Mania tips and tricks. If you have other suggestions for fellow players, don’t hesitate to let us know by commenting below.