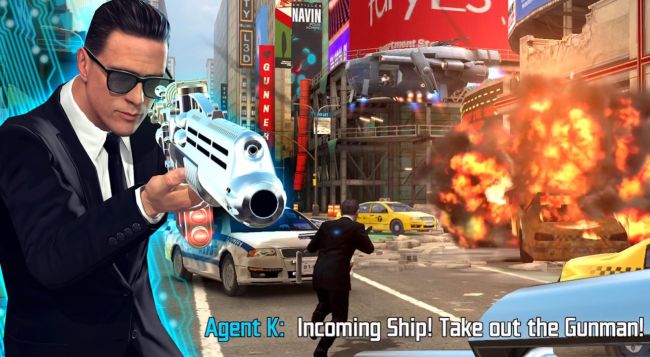 In today’s article we are going to cover all of the Men in Black: Galaxy Defenders tips and cheats to pass more stages and defeat more enemies!

Men In Black is a truly fun game which follows a story and if you’ve watched the movies, or know at least a little bit about MiB, then you’re definitely going to have a blast playing the game. And if that is the case, you might want a couple of tips to pass the stages much easier and win the battles.

So let’s not waste another second and tell you all the Men In Black: Galaxy Defenders tips and tricks that we’ve got to aid you in the game, and to help you get stronger quickly.

No matter which aliens you are hunting, you should always try to aim for their heads. This will deal a lot more damage than a shot to the body, and give you the Headshot bonus. Much like in all the other shooter games, head shots are the most efficient ways to take down your enemies.

There are a few tips that I have for you to make it easier dealing head shots, so let me explain what you should do if you are having a hard time:

Try to zoom in using the zoom scroll:

This scroll is on the right side of the screen and it will help you see the targets up close, making it easier aiming at the head. Always zoom in when you don’t have a clear sight of the aliens and use that to make it easier to target them.

The zoom is useful to me in every situation, as I personally use it for all the shots I take since even if I can see the target well, it feels much safer to aim at the head with 100% accuracy.

Always keep a steady hand and don’t rush shooting because it might end up in you missing the target completely. So go slowly and patiently move the camera over the opponent’s head so that you can shoot it.

The key to taking down enemies is to wait until they are standing still and then attack them, because that way you won’t waste the shots. Since some weapons have a reload time, you can’t really afford to miss shots especially versus strong opponents. So that’s why it’s better to shoot once and kill instead of 10 times and miss.

Learn your types of weapons

There are several weapon types, depending on which stage you are playing. You should learn where to properly shoot with all of them so that you can get used to their “headshot spot”.

Since with each weapon type you might need a couple of games to adjust your aim (with some it will be slightly easier to aim the head than with others) I suggest that you practice with them in Campaign mode instead of Event or PvP. That is, because in PvP other people might be stronger and have adjusted to the weapon already!

There is a way to obtain free Gold, in about 30 seconds or less! Since Gold is the premium currency in the game, as a f2p player you should try to obtain as much as you can for free. You can do that by heading on to the Cart in the upper right corner of the screen, then select the Gold tab and then select the first option.

The first option will reward you with 3 Gold in exchange for watching an advertisement! This is a very useful (and totally free) way to farm more Gold to open the Supply Chests because in them you will get some special cards, and you need to save quite a bit of Gold for that!

I suggest that you watch as many as you can every time and save up as many as possible, preferably enough for the Event chest with a lot of goods inside (which is also quite expensive – 799 Gold)!

Watch ads to double your rewards

Whenever you open a Supply Chest or claim any kind of reward, you will be able to watch an advertisement to double that reward! That is great, as there are limited numbers of ads that you can watch for this, so it is definitely worth claiming everything that you can double or triple by watching them.

I suggest that you always tap on the “Claim 2x” or “Claim 3x” button when they appear, and if they let you watch an ad, then do it regardless of the rewards that get doubled! If it won’t let you just yet, then tap on the button again to see how long you have left to wait until you can watch an ad again. Usually it will be every 24h, but sometimes it could be less. Just check the timer and take that into consideration.

Make sure that you open this chest whenever you can, because the rewards are definitely going to come in handy. I suggest that you claim the chest whenever it is available. You can claim it several times a day, with a cooldown of 4 hours in between claims.

There are a couple of types of chests in the Shop, which contain Agents as well as weapons. I suggest that you save up as much Gold as you can and try to buy the Event chest (799 Gold). As a f2p player it might be a little difficult, but there is also other chests that you can get, much cheaper.

As a second option would be the Agent Chest, which costs only 399 Gold and it gives you Agents and weapons, but slightly less good than the Event Chest would. Now that is also a good option if you don’t want to wait and save that much Gold.

When you have collected enough, I suggest that you go and buy either one because that is the best use of your Gold in my opinion.

Because each level can be played with a specific weapon type only, I suggest that you upgrade all of them accordingly. Focus first on the weapons that you need for the majority of the missions that you do, and then upgrade the others.

You can upgrade for weapons the Zoom, the Stability, the Magazine, Damage and Range. Depending on the missions you might have certain requirements (for example a weapon’s Range upgraded a few times), so try doing these first before anything else.

I suggest that you upgrade the Range and Damage for them first, then the Magazine, Zoom and lastly the Stability. Stability is not that necessary if you follow what I suggested before and you don’t rush when moving the camera. However, Range and Damage are super important, just like the Zoom is too (to help you hit the target much easier).

Finish all missions with 3 stars for extra items

All the missions can be completed with 3 stars maximum, and that’s what you should be aiming to do in every single stage. The missions will require certain conditions to be met in order to get all 3 stars, but before you start a level, you can see all of these requirements in the list when tapping on the level you want to play.

If you haven’t finished a stage with 3 stars yet, then I suggest that you go back to it after upgrading your weapons and give it another shot. The more stars you finish with, the better the rewards will be.

Another good tip for you would be to use Consumables in case you are against a powerful enemy which you can’t defeat otherwise. That’s a great way to have some extra boosts which will help you take down enemies, but I suggest that you don’t waste them as they cost Gold (premium currency).

Watch an ad to get double rewards from missions

When you finished your stage and missions you can choose to watch an advertisement (in the post-game lobby) to double your rewards. This button will appear in the bottom right corner of the screen, and if you can benefit from double reward, you should definitely do it as it will give you extra loot!

Don’t forget that sometimes this option will not be available, as there is a limited number of ads you can watch. That’s why you should claim this by watching an ad only when you have completed the mission with 3 stars for maximum reward possible!

These would be all of our Men In Black: Galaxy Defenders tips and tricks that we have for you right now! Do you know some more useful game tips that you would like to share with the rest of us? Feel free to leave them down in the comments below to be shared with everybody.