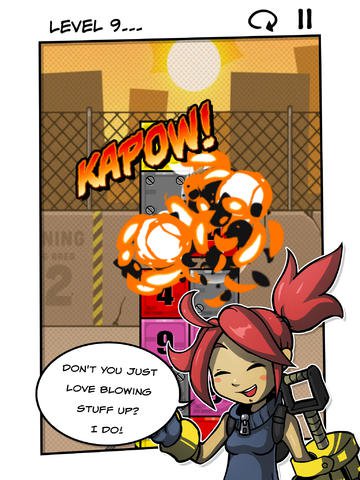 It looks like maths based games are starting to become a trend in the mobile gaming world, as a few games released only recently on the App Store are based upon managing numbers with the use of some basic maths.

Another game based on maths is now available on the App Store, a puzzle game that will require gamers to take down huge structures made up of numbers. Something that may even appeal to those who don’t like maths, as seeing all these numbers blow up on the screen can be some sort of revenge against all the maths we have been forced to go through in school.

Numolition is a relatively simple match-stuff puzzle games that has gamers matching numbers in order to succeed. While the gameplay basic are relatively simple, the game will soon become more complicated, especially if you want to complete some of the optional challenges. At the same time even completing regular stages will require a bit of effort, as things become more hectic.

Numolition also comes with a nice looking anime style graphical look that will definitely draw the attention of all Japanese animation fans gaming on the go with their iOS devices.

Numolition is now available for purchase on the App Store.