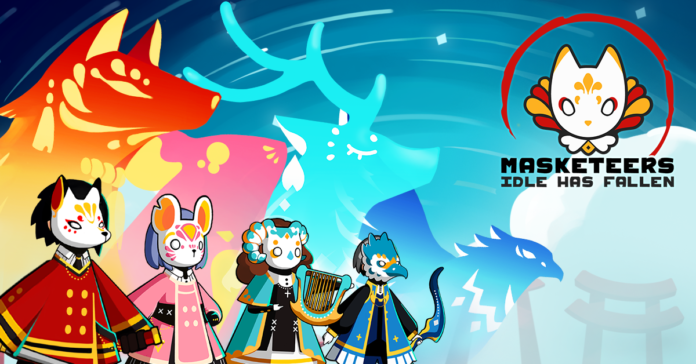 Masketeers: Idle Has Fallen is an idle-RPG. That means progression is absolutely inevitable – you just influence how quickly it happens.

The gameplay sees you facing off against Wraiths in a world brought low by a mysterious pervading melancholy. Masks appear to those in their depths of despair, making them a Masketeer and allowing them to see and combat the dreadful Wraiths, who feed on misery. Much of the game rests on equipping, upgrading, and customising these masks, as well as the Masketeers who wield them.

This guide will take you through the basics of managing your Masketeers, your masks, Runes, Relics, Elements, Guardians, Wisps, and the game’s innovative Orb system.

The main currency in Masketeers: Idle Has Fallen is Sparks. These are left behind every time you kill a Wraith, and you spend them on upgrading your Masketeers. Every time a Masketeer hits a new level, they get a Talent Point to spend on unlocking or upgrading Talents on a skill tree.

Once you’ve jacked your Masketeers up to a point where it seems impossible to proceed, you can Transcend them. This option becomes available after reaching stage 60, and it allows you to cash in some Arcana to spend on summoning and upgrading Relics.

But it also resets the progress of your Masketeers and Guardians. Fortunately, having upgraded Relics allows them to progress faster than before, so Transcending is totally worth it despite the temporary setback it creates.

Another effect of passing level 55 is you get access to new Masketeers, though you can only field four at a time so you need to decide which ones to keep in your active team.

Wraiths come in waves of ten, followed by a boss (although as you progress, you can unlock unique relics that reduce this count to a minimum of 5 waves). If your Masketeers don’t manage to take a boss down, you go into limbo until you’re ready to try again by tapping on the boss icon at the top-right of the screen.

There are several different types of Wraith. Spark Wraiths drop extra sparks, Mask Wraiths drop random masks, Void Wraiths advance you a number of stages, and Phantom Bandits drop Fate Tokens, which you can use to spin the Trader of Fates slot machine whenever you transcend.

Each Masketeer can have up to three runes equipped to them at any one time. These runes impart effects such as increased damage, HP, armor, and so on, and they come in specific shapes that only fit into certain rune slots.

You can fuse matching runes together to create a new rune with a higher star rating, and doing this has the fringe benefit of improving your Rune Mastery, which increases the star value range of all of your runes.

You can get a huge bonus effect by matching up runes and run slots of the same color.

Masks are the source of your Masketeers’ power, and they work almost like characters in other gacha RPGs.

Each one has its own unique powers and characteristics, including a main bonus that increases its wearer’s HP and Damage, an element type, a rune bonus, and various substats.

There are four rarities of masks, the rarer the better, and the two rarest types – Epic and Legendary – count towards your mask collection. Whenever you complete a set of masks you get set bonuses. You can grind spare masks down into dust to spend on either upgrading the masks you want to keep or crafting new ones.

Like Wraiths, Wisps are spectral beings. Unlike Wraiths, they’re good guys, floating over the battlefield and providing bonus effects and generating their own Orbs. Activating a Wisp’s Orb triggers that Wisp’s special ability, which could be anything from increasing a Masketeer’s Damage to granting sparks.

You earn Wisps by hatching Wisp Cores every four hours, or through in-game events and general progress. To level a Wisp up, you just need to hatch another of the same kind. There are 21 different Wisps to collect, though you can only have three in the field at once.

Both Masketeers and Wisps have elemental affinities, with Fire, Ice, and Electric element types available.

Fire deals 50% damage every second, Frost slows a Wraith’s attack speed by 20% and causes it to take an additional 10% per hit, and Electricity deals an extra 10% damage per hit to all Wraiths. Elements cause a range of unique effects such as Burn, frost, and static.

They can be unlocked and levelled-up with Sparks, just like your Masketeers, although they’re only capable of reaching level five. Levelling them up gives you increasing amounts of energy, luck, power, and Spark earning potential. They can also reach milestones allowing you to choose between two unique talents that change the way Masketeers abilities interact  with one another.

There are six different Charms in Masketeers: Idle Has Fallen, and they provide additional benefits when activated. Charms become available at certain levels, with Orbruma unlocking at level 80, for instance, and Repelruma at level 355. Alternatively you can buy them with premium crystals. There’s even the option to earn them from the Trade of Fate that appears during transcendence, and a unique premium item known as the Empress of charms that grants you permanent bonuses and increases the effectiveness of all other charms.

Relics are rare items that provide passive bonuses to HP, Spark drop, or damage. You obtain standard Relics though summoning with arcana, while Special Relics come to you through campaign progress.

You can upgrade Relics once you own them, and collecting sets gives you permanent bonus effects such as reduced Wisp core cooldown times. Disenchanting a Relic in a set neutralises the set effect, however.

Orbs are the main weapon in your Masketeers’ armory, allowing them to unleash attacks, heal allies, applying buffs, and so on. They roll in along a channel at the bottom of the playing area in a random sequence.

Each Masketeer has their own associated Orb, and these can manifest either as Power Orbs or Soul Orbs. Power Orbs increase damage, while Soul Orbs charge your ultimate by five Orbs instead of one.

As you level-up your Masketeers you gain the ability to chain Orbs together, first by twos, then by threes, then by fours, and finally by fives.

Five-Orb chains, meanwhile, spawn even better Special Orbs. They give you what standard Special Orbs give you, but in greater quantities – e.g. the Greater Creation Orb spawns seven Orbs instead of five.

In addition to Orbs you’ll also get access to Ultimates. These special skills recharge over time and appear in the Orb channel whenever they’re ready to deploy.

Aaaaand that’s your lot. We’ve given you tons of information to digest, but it’ll all make sense once you get up and running with Masketeers: Idle Has Fallen.

There’s a lot of stuff to manage in this polished, super-slick idle-RPG, but as long as you keep chasing those notifications and upgrading everything you can you’ll be ridding the world of Wraiths in no time.

Use these tips for yourself by downloading Masketeers: Idle Has Fallen via Google Play and the App Store.