Home Game Guides Marvel’s Guardians of the Galaxy: How to Beat Magus 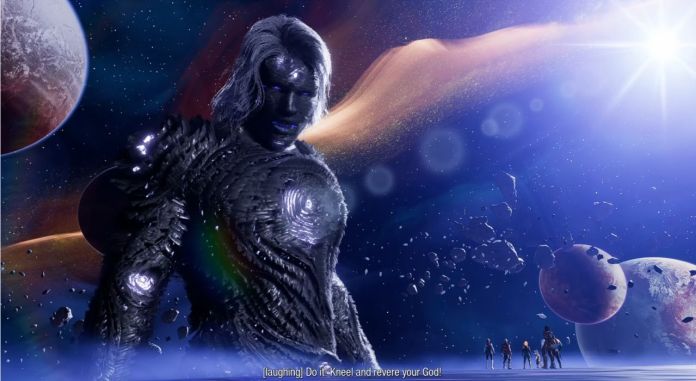 Right from the start of the Marvel’s Guardians of the Galaxy campaign, it was made clear that choices during dialogues do matter, influencing some aspects of the game in a rather big way. As such, it should surprise no one that the game’s final battle involves providing the correct answers to Magus, the god that was hiding inside the Soul Stone and that is now free to threaten the entirety of the galaxy.

Here’s the right choices to pick to defeat Magus without too many issues.

How to Beat Magus in Marvel’s Guardians of the Galaxy

Despite being the Marvel’s Guardians of the Galaxy final boss, Magus is far from being the most challenging. There will be times when your combat skills will be put to the test, sure, but not excessively.

Before the actual fight begins, Magus will ask you to kneel. Refuse to do so, and he will throw a planet at you. Rush forward to get inside Nikki’s shield and then get ready to fight against multiple enemies at once. Using area of effect attacks is a good way of taking these enemies down as quickly as possible. Once they are down, you will have to move away from the indicators on the ground to avoid getting damaged by Magus’ new attack.

After you survive Magus’ assault, you will have to make another dialogue choice. Here, do question the god to make him mad and repeat the previous attack sequence, which should be easy for you to survive at this point.

Once the second assault is done, you will have to provoke Magus to start a quick time event to force Magus back into the Soul Stone. Press the correct buttons as they appear on screen. After the mashing sequence, Magus will be sealed back in the stone, and you will have completed the game. Great job!