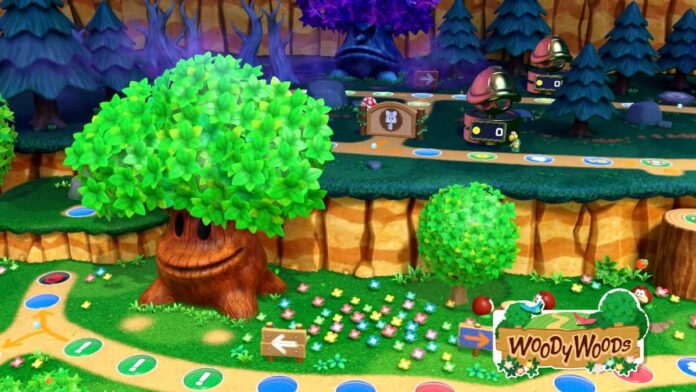 While Mario Party Superstars doesn’t really bring anything new to the table, the game can still be tons of fun, as it comes with some of the best boards featured in previous entries in the series.

The fact that the game features boards that have already appeared in Mario Party games puts newcomers at a disadvantage somewhat, as players need to know about their unique gimmicks to plan their winning strategies.

Here’s everything you need to know about the Woody Woods boards.

The Woody Woods board originally appeared in Mario Party 3 before making its comeback in Mario Party Superstars, and just like in the original game, it is one of the most difficult boards, rated 4 out of 5 stars.

There are many mechanics that make the Woody Woods board challenging. The first one of them is the three signposts found on the board that determine the direction players have to go when they reach the fork they are placed onto. The direction will change every turn, but it is possible to change them while in the middle of one if a player lands on an Event Space nearby. While this may not seem like a big deal, it actually is, as the Stars can appear in multiple locations on the board, and the constant direction changing can make it difficult to reach them without using Chomp Calls, which change the Star’s location, and Golden Pipes that let a player teleport where the Star is.

The Woody Woods board also features two different big trees with Event Spaces nearby. The ones near the green tree will let players pick a reward between a Coin Fruit or a Dice Fruit, which grant extra Coins and another dice throw respectively. The ones near the purple tree, on the other hand, will either make you lose coins or throw the dice again to move back the direction you came in, which can be either good or bad depending on the Star location.

With all these gimmicks, the Woody Woods board can be a little challenging, but with a little bit of luck and tons of planning, any player can emerge victorious!