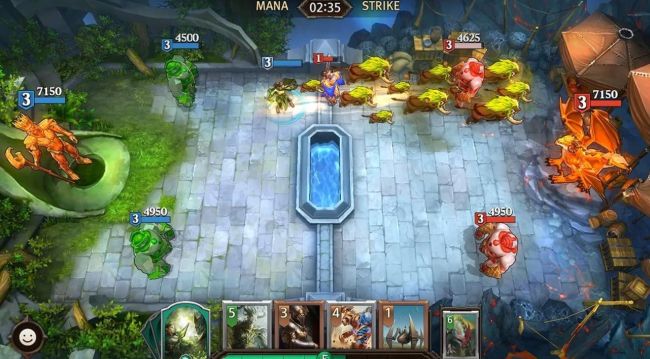 In today’s article we are going to cover all of the Magic: ManaStrike tips and cheats to help you win more battles and to build a powerful deck able to take on all the opponents that lay ahead!

If you want a challenging game which will keep you playing for days and days, then you’ve found it. Magic: ManaStrike has just so many interesting features and a good gameplay that it’s hard not to get addicted to it! Well, if you already know Magic: The Gathering, it’s needless I say more!

Therefore let us dive into the Magic: ManaStrike tips and tricks right here below, because that is what you came here to learn – so let’s do it!

Get your game basics straight

There are some basic things to learn about the game – while not the most innovative, it is indeed a very good game and the gameplay shows it clearly. But for those of you who are not familiar with it, then let me explain it simply:

– You will put together a deck and use it to battle enemies. In that deck you can have various cards (spells, units) and one Planeswalker. (I will give you more details about these below)

– You will use the cards in battle to destroy the enemy’s Sub Guardian (or both of them) and eventually the Main Guardian.

– In order to win a battle you must destroy the enemy Main Guardian first.

– Each battle will carry on for 3 minutes.

– At the 2 minute mark the ManaStrike is activated, which lets you recover Mana twice as fast (allows for some interesting plays).

– If both of the players are tied in Victory Points at the end of the game, there will be an extra 1 minute added.

– You can only see 4 of the 7 cards in your deck at one time, but you can see on the right side which card will come next.

These would be the very basic features of the game. Now there are a ton other things to discuss about, so let me get into them in more detail so it will be easier for you to understand and take into account.

Play Ranked and win all your battles

This is the battle which you will play mainly, but what you need to keep in mind is that you really need to play a lot to reach Rank 9 and get all of those rewards! There are plenty of ranked rewards waiting for you many steps of the way, but the higher you rank up, the better they get.

The Ranked Points are those purple points which are located under your name and when you tap on them you will see the season’s ranks and rewards. Try to advance as much as you can, because it is quite a grind!

Also, don’t forget to claim your rewards whenever you reach a new milestone because they will definitely be worth it! Keep in mind that there are also Season Rewards which are given to you according to the highest rank that you have achieved at the end of the season! That’s another good point to try and stay at the top of your game!

Get your Magic Pass rewards

Under your Ranked Points you will see the Magic Pass, which is a pass that gives you a lot of extra rewards for completing in game tasks and battling enemies (and destroying their Guardian especially).

When you tap on it you will see that in the top right corner of the pass screen, even if it is not super obviously highlighted, you will have some missions. By completing these missions you will earn Pass Points which you can use to claim plenty rewards.

I suggest that you try to complete all the missions possible every day because you will then be able to claim all the rewards that you can from that pass. Now you need to remember that a Magic Pass is for one season – so once the season ends, the new pass will come and you will have to start doing them all over again for new rewards.

Do all of your missions every day to earn Pass Points because there is a limited number to how many you can get, and you will want to get all of the rewards before the season ends.

Now you might wonder – is it worth it? And the answer is, if you have Gems, definitely. When you upgrade the Magic Pass you will be able to claim all of the corresponding rewards for the upgraded one (so both Common Rewards and Magic Rewards) without having to complete extra missions.

The rewards you get from the Magic Rewards (upgraded Pass) are premium rewards, because you used Gems after all. They include emotes, boosters, coins, skin selection ticket, more Gems and plenty of icons. Basically think of the common pass rewards but on steroids and with an extra skin selection ticket.

I suggest that you try and think about it if you think it is worth spending 790 Gems for it and if you are OK with it, then go for it!

Learn your cards before you make a deck

It should be pretty obvious, right? Well, in case it is not, then it should be! You should always try to learn your cards as best as you can and remember what they do and how fast they move, and so on.

Sometimes even if a card seems good on paper, you need to give it a try on the training grounds before you send it to actual battle to see if it is actually as good as it says it is. Now some cards work better with others, so that’s why you need to pay close attention to which ones you can dispatch together.

Because any deck can have 7 cards, it’s not super difficult to pick a handful of them if you know what you want your deck to have. Basically you will want to overwhelm your enemy with numbers and power and then dispatch your Planeswalker and deal the final blow.

So just take a couple of minutes and read each card and see which ones are best kept in the deck!

Test your deck in Training Mode

Always make sure that you try out your new deck in the Training Mode before you head out into actual Ranked battle and face real enemies. That way you can try to adjust anything that is not perfectly working out for you and try to improve where it can be improved.

The enemy you will face in the Training Mode will be a similar rank to yours, so don’t worry about having to face a super duper enemy or a super weak one. You can find the Training Mode when you head on to the Card button -> in the top right you will see Training.

You have limited Planeswalker cards – don’t waste them!

During battle you will only have a few Planeswalker cards at your disposal, so make sure that you don’t dispatch that unit first without any support because that will basically set you up for failure. You should always try to save up Mana and try to dispatch a few smaller troops to take on the enemy while your Planeswalker is crushing it.

Select the right Planeswalker for your deck and playstyle

You should try out different decks using all the different Planeswalkers out there so that you can see which you will like the most and which one you’re having most fun with. I personally like Liliana Vess because of the “power in numbers” strategy that I like to use to overwhelm the enemies.

Now if you are into other play styles, you can try them all out in the Training Mode and see which one you’re enjoying (and winning!) the most. For some help into what each of the Planeswalkers feature, let me explain:

– Ajani Goldmane (white) is good at protecting his allies while attacking the enemies, so it is basically a strong Planeswalker that specializes in dealing with large numbers of enemies.

– Jace Beleren (blue) is good at long range attacks and confusing enemies by creating mirroring copies. It can be really fun to play as, but not very fun to play against.

– Liliana Vess (black) as I mentioned is good at massive attacks in terms of numbers, and she is able to bring allies back from the dead.

Always try to equip cards which work best with the selected Planeswalker that you have, and try to work around their ability.

Because you will have 5 deck slots, you should try to make up 5 different decks with 5 different Planeswalkers so that you can try them all out and see which ones you will like the most, without having to switch the cards back and forth after every battle.

If you are having a hard time, wait for ManaStrike

Whenever you are up against a very strong opponent, and you don’t seem to have a ways of winning the battle, then you should try to stall until the 2 minute mark. That’s when the ManaStrike will kick in and you will be able to get double mana (as well as your enemy).

However, when this happens, you should try to overwhelm the enemy from both sides and try to change the course of the battle in your favor, by making yourself the attacks. Just keep all of the units that you have and try to defend for as long as you can (until the ManaStrike begins) and then you can start sending out all of the troops (not the Planeswalker just yet) on both sides.

Then you can try to send out a PlanesWalker opposite to where his Planeswalker is, but still send out troops to deal with his. Then the opponent will basically go into defense mode. Just don’t panic, have patience and try to keep all of the Sub Guardians alive for as long as you can!

These would be all of our Magic: ManaStrike tips and tricks that we have for you right now! Do you know some more useful game tips and strategies to win that you’d like to share with the rest of us? Leave them down in the comments section below!