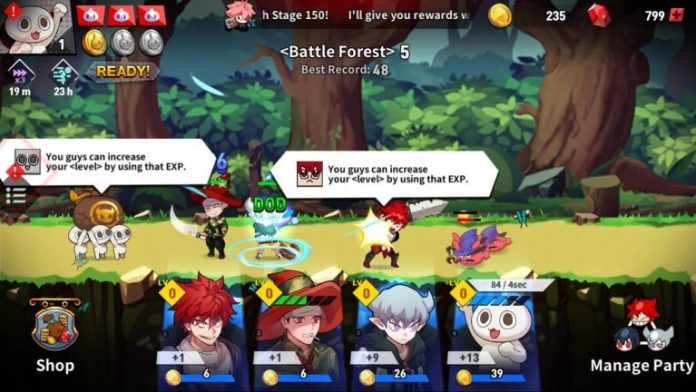 If you want to progress faster in Lucid Adventure, the new Idle RPG by Com2us, you’re at the right place! Today’s Lucid Adventure tips and cheats will guide you through everything that you need to do in order to succeed.

Lucid Adventure: Idle RPG is a traditional side scrolling idle game that involves a lot of familiar concepts, but you can never say that you don’t need extra help, especially since some interesting and less common mechanics are involved here.

We’re going to talk about unlocking heroes, upgrading weapons and returning to start over, as well as everything else that has to be known in the game. So without further ado, let’s jump straight into our Lucid Adventure: Idle RPG tips and guide below!

Not so idle, after all…

One of my biggest problems with Lucid Adventure is that the Idle RPG part doesn’t work as you would expect at first, and that is a bit frustrating.

While your characters proceed while in the offline mode up to a specific stage (minor in comparison with what they can achieve when playing), the biggest problem is that you’re not receiving weapons and other rewards when offline.

This means that instead of playing in short bursts, you have to keep the game running in order to get the most out of it – faster progress and, most importantly, weapons to keep upgrading them.

The good news is that the game has a battery saving mode which really works well: just tap the menu button to the left and select “Sleep Mode” from the top bar.

The actual game screen will be replaced with a very minimalist interface that will safe your battery, but help you progress faster and grab all those great rewards.

Get all weapons and power them all up

Your heroes can only equip a single weapon out of the tons available in the game, but this doesn’t mean that you should completely ignore all the others, on the contrary!

In order to keep all those cool weapons useful, Lucid Adventure sees them offer a bonus to your team members… even if those weapons are not equipped. Together, these bonuses are actually greater than those offered by the equipped weapon itself.

So don’t forget to equip your rarest weapon available so your heroes get the top bonuses, but also upgrade all the other weapons constantly for massive general boosts.

Join a guild for Subjugation Round

Once you reach Team Level 3 – or something like that – you can join a guild. These are really useful right now, as you can enter the so called Subjugation Rounds and fight against extremely powerful foes for top rewards.

All the guild members need to be very active in order to unlock the best rewards, but in the end, anything’s better than nothing, so make sure to play your role and reap on the benefits.

You can also “compete” in guild missions which basically see you send a few heroes away to perform some tasks (they seem to be only time-based), but also donate weapons for Guild points and get all sorts of loot types from there.

In other words, the more active and powerful the guild you’re part of, the better.

Level up your Heroes

In order to progress through the stages, your levels need to be of a level as high as possible. So remember to constantly level them up in order to get the most out of them.

Here is how I do things usually, and I am really happy with the results:

First, I upgrade the Hohoians as much as possible. These are the little white animals that generate gold. You want them to be of the highest level possible (usually 100+ levels of the heroes) in order to produce a ton of money for Hero upgrades.

Then, I tap and hold four fingers over the avatars of the four heroes that are currently in battle.

This will level them up (pretty much) equally and save you a lot of time. If one remains behind, it’s easier to make him or her catch up afterwards and definitely an easier process than leveling them up individually – as I was doing early on in the game.

While Hero levels are reset with each Return, the upgrades you invest in the Manage Party section will always stick. And you should make sure to always have them maxed out (or at least have all XP points spent).

You can increase the general level of a hero there and then, based on their level, unlock new skills and level them up as well.

This requires a lot of XP points which are only gained when you reset your progress and start over.

Always focus on the five Heroes you will bring into battle (the Hohoians will always follow you in all stages), but don’t completely ignore heroes you are not actively using as they might be useful later on in the special instances you can choose when Returning.

Get new Heroes with advantages in specific stages

Unlocking new Heroes can be done by Spending Diamonds, and I suggest you have at least 5 (although 6 is even better). You will earn all the required diamonds for free – and pretty fast too, so unlocking new heroes won’t be a huge Problem.

But there are various instances that you can begin during your adventure, each of them with monsters that have weaknesses either against magic or physical attacks. If you can create a full team of Heroes that have an advantage, you’re always going to do better and progress to a more advanced stage before having to restart.

As I was saying, the game offers a lot of diamonds (which are the premium currency) for free. This will help you a lot, especially early on. But make sure you collect them all and take advantage of all the free diamond offers that you get.

The fastest way to get lots of diamonds quickly is to take my advice above and let the game run in the battery saving mode. This way, every 10-20 minutes you can get back in the game, level up your heroes quickly and collect a ton of rewards.

You also have daily missions to complete and all sorts of missions and rewards, but don’t forget that every 3 hours you can also watch a video ad to receive 150 diamonds for free!

One important set of permanent boosts can be purchased from the store, with Diamonds: God’s Blessings. These will offer some nice boosts and bonuses that will help you in battle.

In order to see these, go to the in-game Shop, then select the God’s Blessing tab at the top. Scroll all the way to the right and you will see them: purchase at least the first level of the permanent boosts in order to get that advantage and then return to spend some extra diamonds whenever you have the chance.

How to level up your Team Level?

One of the biggest challenges I had early on was figuring out what I need to do to increase my Team Level in order to unlock the new features.

And while the game itself doesn’t really show you how much XP you have and how much you need to get to your next team level (or at least I wasn’t able to figure that out), you do gain experience whenever you Return (aka reset progress and start over).

The more advanced the stage you’re returning from, the more XP points you will get and it is possible, especially early on, to get one extra level per Return – although in my case it was usually two returns needed.

Based on your progress in Lucid Adventure, you will get the chance to have 1-3 buffs active for each playthrough.

These Buffs are random each time and you can spend diamonds to try and change a poor one with a better one – but it’s all luck in the end. Either way, anything is better than nothing, so remember to activate these buffs as soon as you can in the game.

The Buffs look like golden coins next to your Team profile in the upper left corner – tap them to activate when you meet the requirements.

Even though early on there’s not much to do in Lucid Adventure: Idle RPG, as you level up and unlock new features, you will have your hands full pretty soon.

And one of the first things that you unlock early on (at Team Level 4) is the Nightmare Tower, where you battle in increasingly difficult levels for very rare loot.

Things will get really difficult really fast, and having a nice selection of strong heroes to choose from is essential here as you will constantly jump from monsters with high magical defense to those with high physical defense and so on.

Try this one over and over again, go back to the main game and return to gain experience and level up, then do whatever it takes to reach the highest level possible. The weapon rewards you get from there are amazing!

When to Return in Lucid Adventure?

Returning is basically the “prestige” element that most idle games have. This means that you reset your progress and start over from scratch (more or less).

In the case of Lucid Adventure, each Return will reward you with experience points that allow you to permanently enhance heroes by leveling them up and unlocking and upgrading new skills.

Returning too often is not the best strategy to use, because you will have minimal XP to play with and it won’t make a difference. My recommendation is to wait until you reach a point where progress to a new stage is very slow and difficult.

Early on, you can easily get, after a return, to 150-200 stages further than before, but it also depends on what heroes you have and if you play in one of the special areas or not.

Either way, my recommendation is to Return when you are at least 100+ stages over the previous best in order to maximize XP gains. Also, make sure to always spend the diamonds to get double the rewards – that’s a must for quick(er) progress!

These would be the tips and tricks that we had for fellow Lucid Adventure : Idle RPG players. If you have additional suggestions, don’t hesitate to share them with the world below.