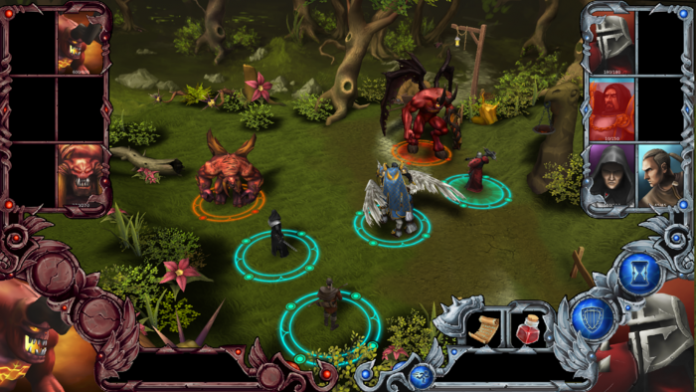 Lords of Discord, a new strategy-based fantasy title for iOS being developed by HeroCraft, has officially launched a Kickstarter crowdfunding campaign and will be released next June if it manage to reach its goal. Contributing at least £6 (a little under $10 U.S.) towards the game will secure backers their very own DRM-free copy of the game plus other goodies.

Turn-based strategy fans are going to want to keep an eye on Lords of Discord which features two different factions: humans and demons, each with their own unique buildings, units, and powers. Players will step into the role of one of three Hero Classes; the armor-clad Warlord, the swift bow-wielding Ranger, or the spell-slinging Wizard as they lead their units against their opponent’s Citadel with the first team managing to destroy their foe’s Citadel being crowned the winner.

As a player’s individual units go out and win battles, they’ll gain experience and level up, acquiring new skills and attacks and eventually even evolving into specialized sub-class units. The battleground itself will also become a key resource for victory as certain special units will allow players to “terramorph” the terrain to better suit their faction. Terramorphing more terrain will grant increased bonuses to the amount of mana and gold that can be harvested from the map and will provide a crucial edge for resourceful players.

The game will feature fully-fledged single-player campaigns for each faction, quick battles against either human or A.I. opponents, and asynchronous “play by mail” multiplayer which will allow players to switch off taking turns without having to play in real-time. At the time of this writing, Lords of Discord still has a ways to go towards its £60,000 goal with £3,204 currently pledged. 24 days still remain for the Kickstarter however so there’s still plenty of time to make up the difference.