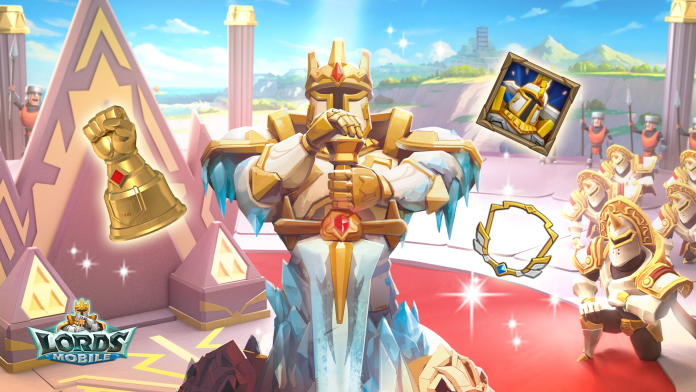 This article is sponsored by Lords Mobile

The annual Lords Mobile Ultimate Guild event is here, meaning an abundance of points, prizes, and potential bragging rights for the next three weeks.

And when we say prizes, we mean prizes. Not only is there a ton of virtual loot on offer, but you might just snag yourself a brand new iPhone too.

More on that later. First, a bit of background of Lords Mobile for the uninitiated.

Released in 2016, Lords Mobile is one of the biggest strategy MMOs in the world, with well over a billion downloads on Android alone. It boasts a polished, cartoony art-style and an accessible line in tower defense-heavy strategy gameplay.

The action plays out in a sprawling fantasy kingdom plunged into turmoil by the death of the Emperor.

Every species on the continent is locked in a bloody race for the throne, meaning you’ll come up against dark elves, robots, dwarves, and even mermaids in your own quest for supremacy.

If you’re already a player, or considering giving Lords Mobile a try, it’s well worth going at it hard between November 14th and December 3rd.

Ultimate Guild 2022 is a three-week event with a different focus each week.

In the first, you’ll be able to earn points by training up your troops and get bonus points by completing a mystery task.

The second week sees you earning points for spending Gems, Holy Stars, Artifact Coins, and so on.

But it’s in the third week that stuff gets real. Here you’ll get points for killing as many enemy troops as you can. It’s the bloodiest incentive scheme imaginable.

Each week, the top 100 players and Guilds will receive additional rare items, such as Blazing Embers, Epic Crimson Manes, and Speed Up Crafting. You can unlock better rewards by purchasing five in-game packs worth $4.99 or more.

And after the event is over the top 100 players and Guilds overall will take receipts of yet another delivery of exclusive event rewards.

To get in on the action, download Lords Mobile right now on the Google Play Store, the App Store, or Steam.