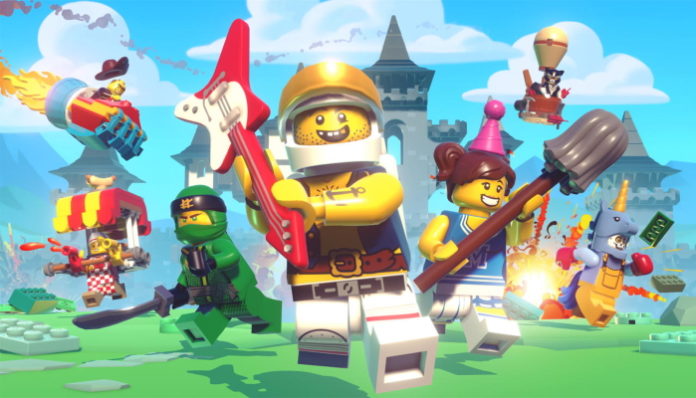 Legos and fighting games collide in Lego Brawls, a new addition to the ever-growing Apple Arcade library. Build and customize your own Lego minifigure, and then take them into the castle to fight for your king or queen in hectic 2D platform brawling action!

And with this being Lego, players will be able to equip their minifigures with hot dog stands, fish, carrot launchers, and all sorts of wacky contraptions! Our Lego Brawls tips and tricks will show you how to fight and move like a pro!

Lego Brawls is a simple and casual party game, but there is still some nuance to it! With that said, we will go over all of it in our Lego Brawls cheats, tips and tricks strategy guide to win all your brawls!

When you start up Lego Brawls for the first time, you will be prompted to choose one minifigure out of a randomly generated set. All of them have the same abilities, so do not worry about the decision too much, just choose your favorite!

After the tutorial, you are sent to the main menu. You can fully customize your minifigure manually by tapping on your name at the bottom left corner of the screen. You can change your hat, head, cape, chest, belt, and legs!

One fun thing to note is that you cannot set a manual name; you must choose your name from a random pool that is generated based on what you are wearing. For example, if your minifig is wearing the rabbit ears, you may get “bunny” in your name!

Get used to moving your minifigure around!

Lego Brawls’ controls are pretty simple: drag on the left screen to use the virtual joystick to move left or right. Swipe up on the right screen to jump up. Swipe forward in front of your minifigure to dash, which can be done in mid air. Swiping down while you are mid air will make your minifigure slam into the ground.

Get used to the dash, as you will be using it a lot. The dash can be used for mobility and defensive or offensive options. You can use the dash in mid air to extend a jump, or you can use it on ground to close the gap between you and opponents.

Dashing into an opponent will knock them back, so you can slam into them to throw them off cliffs. You can also use the dash to evade opponents and get away from them faster.

The mid air slam attack does decent damage, but it is great for causing chaos among the enemy team. Any minifigures caught in the slam attack will be knocked around, making the move great for literally getting the drop on your opponents.

There is also a hidden wall jump maneuver that the game does not tell you about! If you swipe up while your minifigure is touching a wall, they will kick off the wall and bounce back in the opposite direction. Use this technique to trick up opponents and get to higher places!

Compete for the center objective!

In Brawl mode, two team of four players will fight for their queen or king to take the throne. To capture the throne, players must be on the point in the center of the map. When it turns their team’s color, it will begin to generate points. The team who fills up their point meter all the way first wins!

Players need to work together in order to take control of the point. While it may be fun to wander around aiming to solely take out your opponents, you are leaving your team to fend for themselves on the point.

Always play the objective, and do not ignore it – it is the only way to win the match!

Always make sure you are loaded!

Scattered around the castle are prismatic item boxes. Dashing or attacking one of these boxes will grant you an item to use in battle. You have three slots for items, so make sure you are fully loaded before you head into a brawl!

There are four types of weapons in Lego Brawls. Here is a complete list of them!

As you open chests, you will unlock new skins for each weapon type. These are entirely cosmetic and do not have different stats, so pick your favorite!

If you are critically wounded, do not go back into the fray! Instead, start breaking item boxes near your team’s side to lower chances of your running into an opponent. If you are lucky, you may find a pizza inside of the item boxes.

Eating a pizza will restore your health to full, and it is the only way to recover your health in Lego Brawls. You may even find a pizza when you do not need it at the moment, which is still great! You can use it in the middle of a fight to surprise your opponents!

Depending on the time of day you queue up in Brawl Mode, you may or may not find a match. If Lego Brawls cannot find enough people for a full match, it simply will not start and tells you to try again another time.

There were multiple times where we could not find enough players, so eventually we just brawled in Training Mode. In this mode, you will be put in a small cave full of skeletons. There are item boxes and elevators just like normal!

Grab some weapons and start busting some skeleton skulls! Every skeleton you take down adds one point into the chest after the game, so if you take down a bunch of skeletons you will get a treasure chest for sure at the end!

Training Mode lasts until you die, so go ahead and have fun some fun while practicing your movement and attack options.

Every time you complete a match, you will be earned chest points depending on how well you did during the match. When you have enough chest points, you can open the chest to earn a new skin for your minifigures or weapons!

As we mentioned before, Training Mode is also a great way to earn new unlocks as you do not need to take out that many skeletons in order to be eligible for a chest.

That’s it for our Lego Brawls guide! With this, you should be able to come out on every match! If you have any other tips or tricks to share, let us know in the comments below!