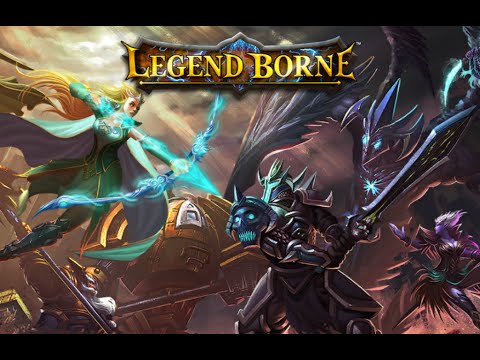 In the world of Mora, two kingdoms duke it out for total control – the noble Kingdom of Light and the mysterious Realm of Darkness. In Legend Borne, a base management strategy game, you will side with a faction and fight for their cause. We’ll help you build the ultimate army and base with our Legend Borne cheats, tips and tricks strategy guide!

The quests are one of the very few ways to earn Essence, the resource you need to upgrade your heroes and units. The first quest will always be a time related one. This one is very simple, as you just need to wait a certain amount of type before the quest completes on its own. The other two require you to perform a small task, such as collecting enough of a resource, building a structure, and so forth. Once you complete either of these two, it’ll be a while before you receive a new quest, so try to do them as soon as you can.

Keep in mind that buildings will not finish on their own. Once a building time is completed, you must enter the game and tap on the building to finalize it. Make sure you turn on notifications for the game to make sure you don’t accidentally leave a building hanging!

With the exception of heroes, all units have a “favorite target” listed in their unit description. Make sure you pay attention to this, as it’ll enable you to correctly guess where your units will move during battle. Units will always try to go after their favorite target; for example, Elven Archers’ favorite target is the hero’s target, which means they will always go after whoever your hero targets. Peasants, on the other hand, will always target resource buildings. This means that if you send them in at the start of a base siege, they’ll will run straight up to the wall to try to get to the resource buildings behind it. This is a surefire way to get them all killed, so be very careful about who you deploy and when you do it.

4. Build defenses on both sides!

When it comes to your own base and its defense, remember that you can also move and build structures on the inside of the Gate Tower. Don’t just keep all of your towers on the outside; have some on the inside as well to throw any would-be invaders off.

You start out with two building slots. Building times in this game reach into the hour waits very quickly, so you’re going to want to save your gems right off the bat. To buy a third builder slot, you’ll need a steep 400 gems to unlock it, so start saving! You can build a Gem Mine that produces gems at a very slow rate, but upgrading it helps a lot. At level 1, the gem mine produce 2 gems every hour, and it can hold up to 10 gems at once.

As you uncover more of the map, sometimes you’ll reveal a summoning shrine. These shrines can be used to immediately add a unit to your reserves. These shrines hold up to three units at once, and they will refill with new units over time. These are great for bolstering your numbers, and sometimes you might even be able to summon a unit you’ve never seen before.

7. Fight in the Legend Arena!

Once you’ve got a sizable army and you’ve upgraded your units a bit, consider fighting in the Legend Arena. Here, you will go up against other players’ bases. Should you manage to take a player down, you’ll be rewarded with honor points. You can spend honor points on powerful beings known as Legends. You earn very few honor points initially, but with each victory you will earn a win streak which will multiply the amount of honor points you get from your next victory. Just be warned: there is no way to tell what kind of base you’ll be going up against, so make sure you are prepared!

That’s all for Legend Arena. If you have any other tips or tricks to share, leave a comment below!