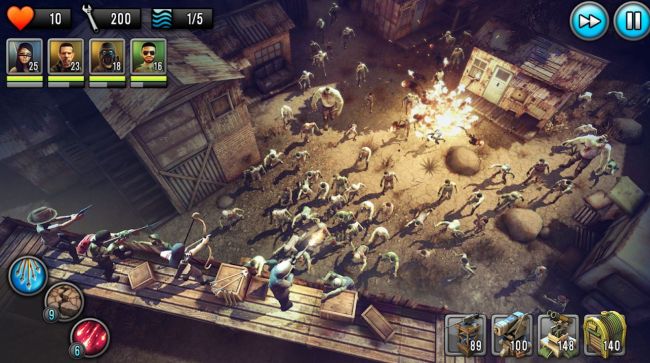 In today’s article we are going to cover all of the Last Hope TD tips and cheats to help you win more battles and to better prepare for any encounters!

This game combines a fun type of game with a very interesting story which I definitely recommend following as it’s simple but very efficient! So from a personal point of view, this game is ideal for me as it’s pretty simple, has some realistic graphics and follows an actual story!

But enough with the praising! Since you are here, you’re here to learn about the Last Hope TD tips and tricks, so let’s not waste another second and dive right into them right here below!

Learn all about each tower

There are not a million towers in the game, so it shouldn’t be super difficult to learn each of their traits and range (at level 1) and how to better place them. You will start unlocking them 1 by 1, so it’s not difficult to try and remember their basic stats. Do that and keep on upgrading them, starting with the most used tower you have.

Head on to the Workshop and there you will see all of the towers in the game, available and not available yet. You can compare their stats and AP cost and see which ones are the best for you to use, given all that they give.

Each of the towers can be researched further and upgraded, which will boost their damage, the attack speed and many other features. These upgrades cost increasingly more Money, so it’s good to start slow and build up.

You can start researching all the traits, but try starting with the ones that you feel like would be the most helpful. Eventually you will get them all, because it is just a matter of time. But until then, you need to be able to get all the zombies that are trying to finish you off!

Always have something researching

This goes hand in hand with upgrading all of the towers: basically upgrading a tower takes time, and that is called “Researching”. Once you pay the cost in money you will need to spend some time to finish that upgrade. In my opinion it’s best if you always have some tower researching because since it takes more and more time, you need to use that time wisely.

So try to do this, starting with your most powerful and most used towers first and then move on to the next ones. It’s the best approach because that way you never spend unnecessary time waiting for a research to be complete.

I always prefer to start with upgrades that boost the damage of the towers, and only then the firing rate, because at the beginning the zombies are pretty slow, so more damage is going to be enough to take them down faster.

Once I’ve upgraded the damage, then I move on to the attack speed and try upgrading that. It’s a good strategy especially because it makes all the towers work well on their own even in more advanced stages.

Place the towers at key spots

This is arguably one of the most important things to take into consideration in this TD game. The towers that you place need to be situated at key locations which can affect multiple lanes.

That is, because zombies will start pouring in from all places possible: climb walls, rocks, come from the roads, so it’s good to try and spot all of these ‘key’ locations and place the towers at the crossroads, or at other locations which can reach multiple lanes of where the zombies are coming through.

I suggest that the first tower you should go ahead and try and place it as close to the enemy first wave as possible, and try to have it attacking the zombies as they rush through. Then, the second one, find a good spot at a crossroads and put it there because there will definitely be some zombies wanting to come from another lane.

Once you placed these, you can then start filling in the remaining empty slots with towers because as you well know, there is power in numbers. So the more towers you have, the better you will defend. Once you have down about 4-5 towers, you can start upgrading them starting with the tower that gets the most use!

Watch an ad to get free Money!

If you want to get some free Money fast, there the best option would be to watch an advertisement which gives you 500 Money in about 30 seconds without having to do anything else.

You can do that by heading on to the Shop menu at the top, and the very last option that you see there is the one which lets you play an ad and receive Money. I suggest that if you want to save up money quickly in order to make more upgrades or to unlock more heroes, then you take this into consideration as well.

Because at the beginning most of the upgrades cost less than 500 Money, I really suggest that you watch a few ads and start upgrading and researching everything that you can, because with 2 ads watched, you’ll get 1000 Money which you can use to make 3-4 upgrades.

Alongside towers, there are also heroes in the game which will help you take down zombies. These heroes are not too many, but from the few that there are you should definitely try to unlock a second one sooner or later. The free heroes that you can unlock in the game are:

– Princess: she is your starting hero, so she comes for free.

– Barbarian: you will unlock this hero for free after completing “Tree of Life”.

– Commander: unlocks when you complete “The Lab” level.

The other heroes can be unlocked by paying for them, but it’s really no need, because once you unlock Sheriff or Mechanic they will do a great job.

The heroes will have their skills unlocked once you pass level 3. In my opinion you should try to rush passing this level and then start upgrading their skills one by one because you will see that it’s going to make a huge difference. Each hero has their own different skills, so read them carefully to see which ones you should prioritize.

Another way to obtain a lot of Money is to try and complete as many Achievements as possible. These can be found in the upper left corner of the screen, and there you will have a pretty long list of them.

I suggest that you give them a quick read, and whenever possible, try to complete them because they will make quite a bit of difference in terms of Money acquiring and upgrades. That is, because each Achievement can give more (or less) Money.

Pass the levels as you can at start, then re-play them once you made more upgrades

That is one of the easiest ways to make more Money while still keeping somewhat a steady progress because once you made upgrades the towers will eventually start destroying the zombies in 1 shot. So don’t worry if you can’t manage to finish a level with 3 stars from the very start – just continue as you can, and then once you have made a few upgrades, re-play that level!

Buy better equipment for your heroes

If your heroes aren’t having much impact on the game, then it might be time to change their currently shabby equipment with some better one! If you didn’t know that is possible, then you probably haven’t tried yet!

To change a hero’s equipment simply tap on the hero and then in the bottom left corner of the window that appears you will see their Gear. Tap on a piece of gear there and you can see which ones are available for purchase and which ones require a higher level to be passed in order to unlock it.

I suggest that once you’ve made all the researches you want, you save up Money and invest it into buying some better Gear for your hero because it’s going to make a huge difference on the battlefield.

These would be all of our Last Hope TD tips and tricks that we have for you right now! Do you have a few more game tips and strategies to pass more levels? Feel free to share them with us by leaving them down in the comments section below!