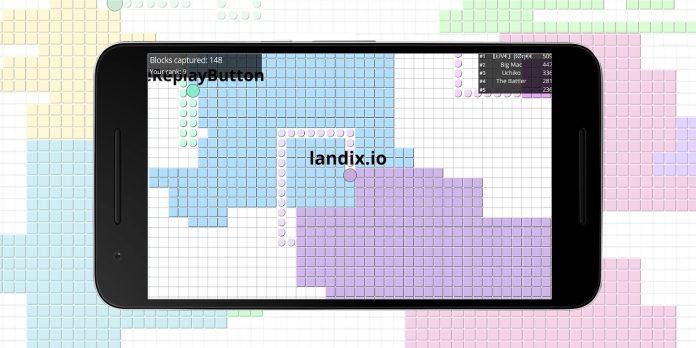 Landix.io or, to put it simple, Landix, is a really interesting game in the “.io” series started a while ago by agario. This time, there are no fancy weapons or upgrades, though. It’s just you and your skill to get as much land as possible and destroy your opponents in the mean time. Fun and addictive, this is the type of game that you can’t put down once you pick it up and we’re here to help you get the most out of it by sharing some Landix.io cheats and tips.

So let’s not waste a single second – there are enemies to defeat and charts to top! Here are Touch, Tap, Play’s Landix tips and cheats!

1. Move as soon as you start
For some reason, the most difficult part of the game is that when you’re just starting up as the game has the habit of placing you nearby an opponent who will destroy you. So try to move left or right as soon as you start the game and get back to the safety of your area. Only afterwards you can plan your next moves and start ruling the board.

2. Stick to your area!
You are only safe when you are inside your area, so try to spend as much time as possible inside. A solid strategy is to just roam inside your area, keeping your eyes open for what’s happening nearby and striking as soon as an opponent gets too brave. You only have to hit their line and get back to your area and you destroy them.

Another thing that you should do is to try and conquer small squares: the further you get from your area, the more chances are that another player will destroy it. So go for small bites and eventually you’ll outgrow them all!

3. Find the balance between attack and defense
By defense, I mean roaming inside your area where you are safe. By attack, I mean going for other players. Finding the balance is the key to getting as much as possible from the game. Even though you can play for long periods of time just hiding, there’s no fun in that, so it’s best to conquer some land and, even more, destroy enemies. Just make sure that you are patient: wait for them to make a mistake instead of being the one who makes a mistake first.

4. Change the control scheme
If you don’t like the swiping control scheme which can indeed prove bit difficult and unresponsive every now and then, you can change it to a virtual joystick. I would personally recommend you to do so and see which one works better for you.

5. Conquer the corners
A good strategy is to always try and expand towards the corners of the board or at least towards the margins: those areas, once conquered, are almost impossible to be taken away from you, so you will easily hold onto larger areas and rock your way to the top spot on the charts quickly.

These would be, for now, our Landix io cheats and tips for you. If you have other strategies that might help fellow players, let us know by commenting below!