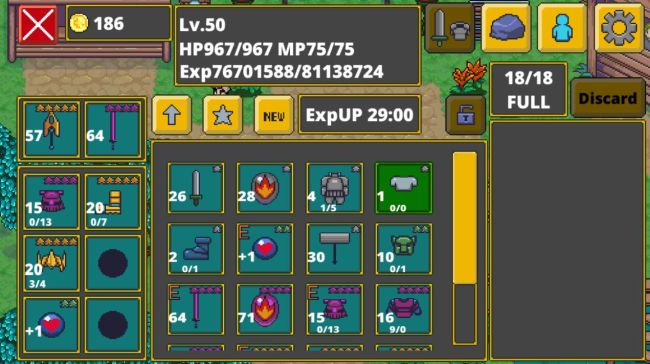 In today’s article we are going to cover Labyrinth Legend and tell you all the tips and cheats that you need to know in order to get stronger and learn every good battle tip that we know about.

As soon as I have started playing, I fell in love with the game – not just because of how easy it is to play it, but also fun and with a very nice and engaging story! So I am pretty positive that if you want a fun game, Labyrinth Legend can be that for you, as from what I have seen it not only has the linear game pattern, but also hidden stuff!

Do you want to learn what all of those hidden secrets are along with all of the Labyrinth Legend tips and tricks? Well then, let’s not waste another second and dive right into them!

When you first start playing the game you will be placed in the village affected by the Queen’s spell. There you can talk to the NPCs with a dialogue box above their heads to learn more about them and to read their interactions.

Most of the NPCs won’t have a lot of tasks for you since they consider you “too weak” but as you progress through, you will be able to interact more with them. Either way, try learning where things are mainly for now, such as the Blacksmith and the other NPCs, then adventure onto the Labyrinth.

In your quest for exploring the village, you should make sure that you remember the location for the NPCs in town and try to head on there when you want to get new items or upgrade your existing ones.

This will help save you a lot of time in the upcoming time in game because you will know exactly where you need to go for everything and not lose time wandering around the village.

This big Golden Chest can be found in the upper left corner of the village – it can’t be missed, as it is pretty big (and Golden as the name suggests). If you need other references to find it, then try looking next to the Blacksmith and Accessory Shop for it because it will be on the left side of them.

Now if you don’t see a chest here (and only the empty stone podium) then it’s not available just yet. So wait a little while and once it becomes available you can open it. In order to open the chest you need to watch a short advertisement – so try doing that by pressing the first button (I am not sure exactly what it says because it’s written in Japanese).

But either way, that must mean something like “open now” or so and therefore I suggest that if you got 30 seconds (at most) to spare, then watch an ad and claim the Coins inside as well as possibly some better equipment!

Adventure into the Dungeons

In the Dungeons you will find all kinds of goods and encounters. I suggest that before you go you should equip with the strongest gear that you have. Not just weapons, but also helmet, boots, armor and so on.

Do this before you go in (if you have some on you in bag) and then prepare to fight all of the slimes and bats and enemies that approach you! In the Dungeon you can find various encounters, from enemies, to chests and more.

While you are fighting int he Dungeon you are going to pick up quite a lot of equipment. Make sure that you always equip the one with better stats and Damage, because it will make your character much stronger.

Another thing is that you should check the kind of equipment you get. They all have different power, and you should try to put on the most powerful one that you pick up. That won’t appear in the first 2 minutes of playing, but sooner or later you will get. So when you do, don’t forget to equip the best ones!

Be on the lookout for boxes

In the Labyrinth you will run into quite a lot of boxes. Never miss them and try to always pick up as many as possible they can contain not only Coins, but also equipment. So it’s way better to try and find every hidden box there is on each level of the Labyrinth.

There will be at least one in each level (at least for me there was, in each level that I went to) and it’s definitely worth trying to find them because if there is a chance for you to get a better item, you should take it.

I suggest that if you see a section heading away from the exit, just remember where the exit is and go back to it after you’ve explored the level completely. That means that you might spend a little more time for each level, but the reward will also be better.

Hunt all the bushes!

Now another thing worth mentioning is that whenever you send an attack, you can land it on the random flowers and bushes in the game. What you might have (or have not) noticed is that you can get a small amount of Coins for destroying them!

If you see bushes and flowers all over (be it in the village or in the Labyrinth) you should destroy them on sight! Even if you don’t get huge amounts of rewards, it will still be worth it because they will add up slowly and eventually you will gather enough Coins to buy anything you want.

Be careful with your HP potion

When you fight enemies they will possibly land some damage on you. The more you progress through, the more damage the enemies will deal, so you need to gear up with better stuff all the time.

One other very important thing worth mentioning here is that you only have a limited number of potions available each time you go into the Labyrinth. You shouldn’t waste them only in case of major force, so if you take a lot of damage, by all means use a potion – otherwise, if you are missing just some HP, then fight more enemies because eventually they will drop HP (looks like small hearts).

In order to refill your potions, you should go back to the village (Or maybe you can pick some up? But don’t rely on that!). So if you see that the damage enemies deal is too much and you don’t have a potion on you, just head back and come back when you have Potions.

Kiting is your best advantage

Kiting basically means keeping a safe distance from enemies while hitting them and dealing damage continuously. Kiting can be a little difficult at start until you get used to it, but soon enough you will master it.

To kite much easier, use your left hand to move away from the monster, while with the right hand you keep sending arrows from your bow or boomerang or from any of the other ranged weapon. Try this in the low level Lab until you master it, and then put it to good use in the higher levels.

The items that you don’t really want can be sold to the NPCs because that is much better than dropping them in the labyrinth on the floor. When your bag fills up, just head back home and at the Blacksmith, select the Sell tab to sell the unwanted items.

That will give you more Gold the better the gear is, so make sure that you do it at the very beginning whenever your bag is full. If a gear piece is 2 stars, it will cost a lot more than a simple 1 star gear, so if you get doubles or you don’t like them, don’t feel bad about selling them!

If you haven’t received yet any equipment that you like, what you can do is save up Gold (from selling the trash gear) and buy it from the Blacksmith and Accessory Shop. This can be done much easier if you just go farm the early levels for random items that you head back and sell, and buy the equipment you like.

Even if you don’t like any of the equipment from the Blacksmith, you should still check out the Accessory Shop and get an Accessory that you can then start upgrading. I would recommend the Strength one or the Defense one, or even one of the others depending on the equipment you use!

These would be all of our Labyrinth Legend tips and tricks that we have for you right now! What are some of your best game tips and strategies that you know? Feel free to share them with us and the other players by leaving them down in the comments section below!