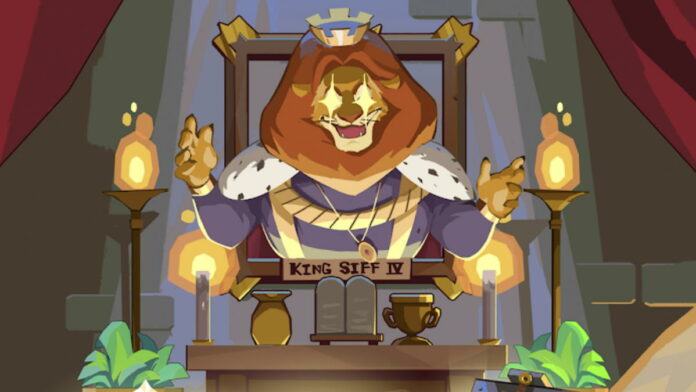 The medieval animal kingdom Kingdomtopia – yes, that is its real name – has been invaded by a mysterious enemy, and now you are the only hope of bringing the kingdom out of ruins! Welcome to Kingdomtopia, a new fantasy animal-themed idle game. Rebuild farms, markets, ports, and more as you rebuild the once great kingdom of Kingdomtopia!

Someone is a little too cheap to send carrier pigeons to your kingdom, so every now and then you will see little paper planes floating across your screen. You can also listen for a “whoosh” sound effect if you have sound enabled.

Tap on the paper plane and you will be presented with a nice sum of gold. You can collect the gold on the spot, or if you have some spare time to kill you can watch a 30 second advertisement to triple the gold.

We highly recommend leaving the game open if you do not like waiting around for too long. These random paper planes show up fairly often, and the extra gold becomes very significant, especially early on in the game. The gold you get from the planes increases as you progress through the game.

Occasionally the person sending these paper planes will feel a little extravagant and send a plane made out of pure gold. Golden planes will reward you with gems, the premium currency of the game, instead of gold.

Each golden plane will give you two gems, with the option to triple it with an advertisement to six. This is the only way to get gems besides completing the achievements, so make sure to grab these planes when you can!

(This Kingdomtopia guide was first published on Touch Tap Play)

Progressing Through the Story

In Kingdomtopia, players will help the fledgling prince Snow as he tries to take over his late father’s duties of ruling the kingdom. Snow is not exactly the most motivated person around, so he needs a lot of guidance before he is ready to become the next true king.

Snow’s father left behind a journal of the kingdom to guide him, which can be accessed by tapping the journal at the top left corner of the main menu. The game is split into different chapters, and to progress to the next chapter you must accumulate enough gold.

Open the journal once you have enough gold and tap on the complete button to head to the next chapter, where the story will unfold.

You must construct the most used buildings of kingdom in order to get it up and running again. You first build the structure, then you can collect gold from it every time its progress bar fills up all the way.

You can then use that gold to upgrade the building, which will make the meter fill up faster and give you more gold. This is main gameplay loop of Kingdomtopia.

There is also a second, yellow meter next to the blue production meter. This is the next upgrade bonus meter – every time you upgrade the building, this meter will fill up. The building will get a nice bonus, like doubled gold output, when the renovation bonus meter fills up.

Apply enough upgrades to a single building and eventually the blue production meter will gain two colors and stay full. At this point, the building is producing at its fastest speed and it cannot go any faster. You can still upgrade it to increase the amount of gold it generates, but you are generally better off just moving onto the next building.

Make sure to purchase a mayor for each building, as they will collect the gold for you allowing the building to continue generating gold. Mayors are more important than anything else, so you should prioritize them.

Renovations will apply a flat multiplier bonus to a specific building. For example the Divination 1 renovation will triple the Divine building’s profits! You can purchase renovations as soon as you are done with the tutorial.

Renovations are incredibly expensive, so you might not be able to afford them for a while. They are conveniently listed in descending order cheapest to most expensive, so you can just work your way down the list, buying all the renovations.

You can check which buildings have renovation bonuses applied to them by going to your statistics screen. Each building that has renovations on it will have a multiplier in blue text next to it.

Fight off the Invaders

The mysterious animal soldiers that are invading the kingdom will directly attack your kingdom starting in chapter 2. You will be prompted to fight back every couple of minutes, and the game will alert you with loud horn to notify you.

Tap on the swords clashing at the bottom right corner of the screen to initiate the fight. During the fight you must tap the screen as fast as you can to repel the invaders, and the more you tap, the more gold you earn.

A trick for this is to use at least two fingers to tap at the same time. Most devices can register up to three taps at a time, so tap quickly using three fingers! You will get a lot more gold if you do it this way as opposed to one finger.

Much like the paper planes, the amount of gold you earn from the invaders scales with your progress through the main story. Fighting off the invaders in the later stages of the game can net you a lot of gold!

The invaders will show up fairly often, maybe a few minutes apart, which gives players another incentive to keep the game open. It is not required to play the game actively, but if you want to make progress without having to wait too long, it is highly recommend to do so.

The shop contains a number of helpful things you can buy with the currency you earn in-game.

If you are mostly an idle player and spend a lot of time away from the game, you may want to purchase the Offline Coins Upgrades. For 50 gems, you can increase the maximum offline generation time from three to six hours.

Time Warps allow to instantly pass a certain amount of time. A 30 minute time warp is free every day, so make sure to take advantage of that. The other options cost some gems.

Income Multiplier will permanently increase your income, but these boosts are quite costly. The x3 multiplier costs 200 gems, while the x12 costs 500, and finally the x27 costs 1,000 gems.

Despite the high costs, these multipliers are what you want to save your gems for, as they easily out-value everything else on the shop that costs gems.

That’s all for Kingdomtopia! If you have any other tips or tricks to share, let us know in the comments below!