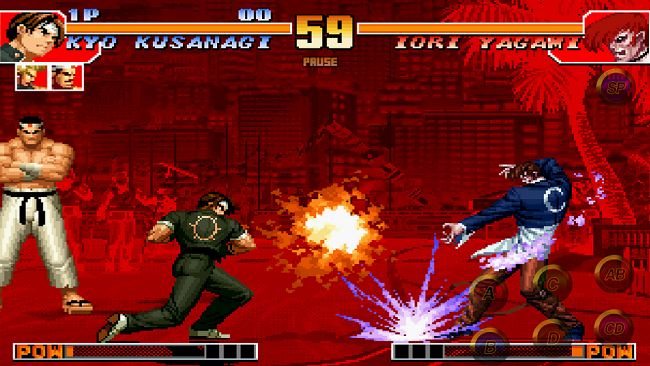 With the huge amount of new titles getting released this month, it’s not so strange that some releases slip right under our nose, completely unnoticed. This is even more true when we’re talking about a game that’s not really suited to general audience of mobile games and that doesn’t get announced.

Old school gamers and fighting games enthusiasts will be happy to know that a classic game is now available for purchase on the App Store.

King Of Fighters ’97 is a classic fighting game developed by SNK, the team behind other successful fighting game series like Fatal Fury, Art Of Fighting, Samurai Showdown and many others.

The game is a decent port of the original arcade game. All the 35 characters of the game have been included together with all the stages available in the arcade game.

The game has obviously received some minor upgrades and new touch screen controls which mimic the original six buttons arcade controls. They may not be as responsive as an arcade stick, but get the job done for some casual playing. An SP button has also been included so that the most special moves can be performed without having to do some complicated motions with the virtual stick.

King Of Fighters ’97 is now available on the App Store. The game can be played on both iPhone and iPad. You can check out a trailer detailing all of the features of the game right below.