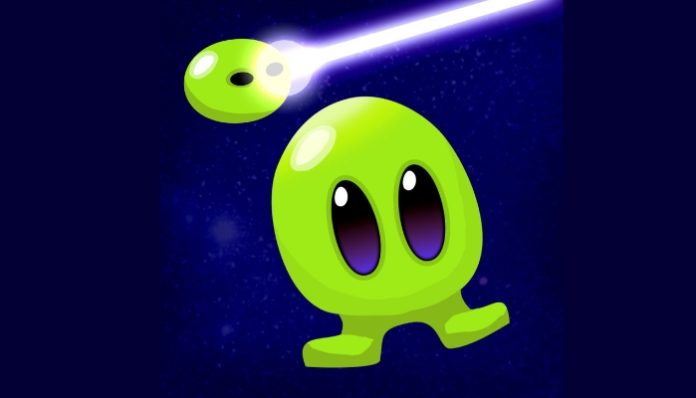 The evil empire has nearly wiped out an alien race and stolen the sacred gems! One tiny alien managed to sneak away in the chaos, and now he is out to restore the gems and set the universe right in Tiny Alien, coming later in April!

Tiny Alien is a little green dude who cannot keep bouncing. The fate of the world lies in his hands, so it is up to you to help him through fast paced arcade platforming space levels! Bounce your way through multiple out-of-this-world locales!

Tiny Alien does not shoot himself, but instead he has a little drone that follows him everywhere. The drone will automatically open fire upon any nearby threats, so all you have to worry about is jumping, dodging, and maneuvering through the many bouncy levels of Tiny Alien.

With powerful enemies comes even more powerful power ups, so do not let Tiny Alien go into these battles under equipped! There are lots of different power ups that change how the drone’s shots behave, so try them all out! There are a lot of fearsome bosses to battle, so you are going to need the extra fire power!

With classic sprite artwork and a simple arcade experience, Tiny Alien is a must for any action fan. Tiny Alien will launch on April 24, 2019 on the App Store.